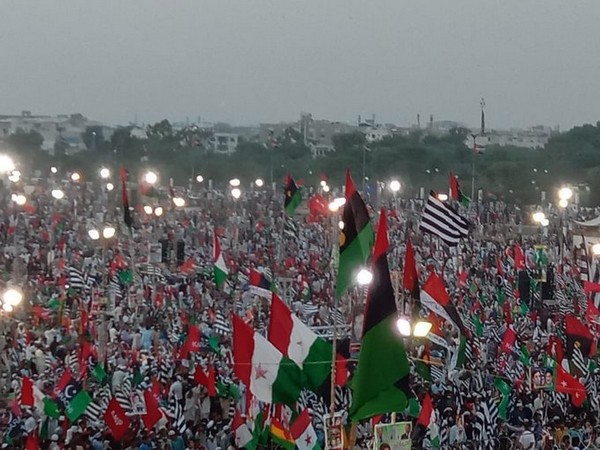 Peshawar [Pakistan], November 21 (ANI): The opposition's Pakistan Democratic Movement (PDM) on Friday vowed to defy government ban on its public gathering in Peshawar on Sunday and warned the district administration that use of force to stop the protesting citizens could spark street battles.

While speaking at a joint press conference at the Peshawar Press Club, the representatives of the opposition parties declared that rallies across the country will be held as the PDM planned, until Imran Khan's Pakistan Tehreek-e-Insaf (PTI) government is removed, reported Dawn.
This came after the Peshawar deputy commissioner had refused to allow the opposition to hold their rally scheduled for November 22 in Khyber Pakhtunkhwa.
"The COVID-19 positivity rate [in] District Peshawar has presently exceeded 13 per cent, which is alarmingly high and any large public gathering is likely to further increase the spread of life-threatening virus. The undersigned regrets to inform you that permission for the said event has not been granted," Dawn quoted the Peshawar deputy commissioner, reported Dawn.
Pakistan Peoples Party's (PPP) central information secretary Dr Nafeesa Shah at a separate presser also warned the government against playing with the emotions of the masses, asking the administration to allow the 11-party opposition alliance to hold its Peshawar rally in a 'peaceful' manner.
Expressing serious concern over the increasing prices of life-saving drugs, food items and other essential commodities, Dr Shah said the existing inflation was the outcome of bad governance.
She further added the government was trying to hide behind the pandemic but warned that it would not find any route to escape.
The PPP leader also alleged that the recent Gilgit-Baltistan election once again proved that the PTI had come to power through election engineering.
Meanwhile, several other opposition leaders also condemned the administration for turning down the permission for the Sunday gathering during the press conference, and said the rulers were using different pretexts to disturb the people's movement against the government, according to Dawn.
They further warned the government that any attempt to create hurdles in the holding of PDM's meetings would spark street protests.
"We are ready to go to extreme point against government," said Jamiat Ulema-i-Islam-Fazl's Khyber Pakhtunkhwa chapter chief Senator Maulana Atta-ur-Rehman.
The PDM had earlier held massive rallies in Punjab, Sindh and Balochistan, demanding Prime Minister Imran Khan's resignation.
Meanwhile, opposition candidates have led protests in Gilgit Baltistan, who accuse the local election commission of delaying and manipulating the results of Sunday's polls to favour Imran Khan's PTI party. (ANI)