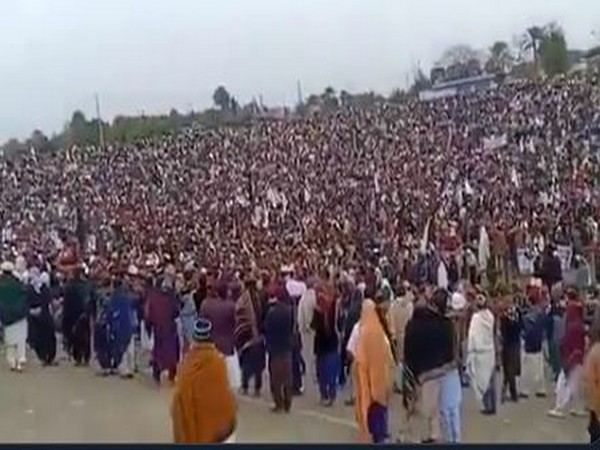 Bannu (Khyber Pakhtunkhwa) [Pakistan], Jan 12 (ANI): A massive number of protestors participated in a Pashtun unity march in Bannu of Khyber Pakhtunkhwa on Sunday against the atrocities inflicted by the military and demanded the formation of a commission to probe the army brutalities in the region.

'Pashtun Long March' is a protest movement led by young Pashtuns from the Federally Administered Tribal Areas (FATA), where they have long been the targets of military operations, internal displacement, ethnic stereotyping and abductions by the security forces.
The march was called by the Pashtun Tahafuz Movement (PTM) -- a political party -- which exposes the military offences and brings to the front the issues, which continue to plague the locals including enforced disappearances and fake encounters by the state.
Demonstrators condemned the atrocities carried out by the Pakistani Arm -- gross human rights violations, enforced disappearances, extra-judicial killings, torture, and arbitrary detentions of their leaders and workers living in Pakistan.
The protests are being carried out on a large scale. However, Pakistani media has been mum about the event. #PashtunLongMarch2 Bannu was seen trending to the Pakistani Twitter.
"A massive gathering with an amazing ecstatic spirit of PTM long march in Bannu against atrocities of state & demanding truth commission to probe the brutalities inflicted on Pashtun land & seek justice. You can jail, kill or disappear us but you can't ignore us," said a user.
Pakistanis chided media for not reporting the march.
"It is the responsibility of media to give coverage of Pashtun March. In the age of social media, people know what is happening. You cannot hide the news, indeed, it damages your credibility," said a Twitterati.
"Internet off, no coverage in Pak media as Pashtun long march takes place to Bannu," said another. (ANI)