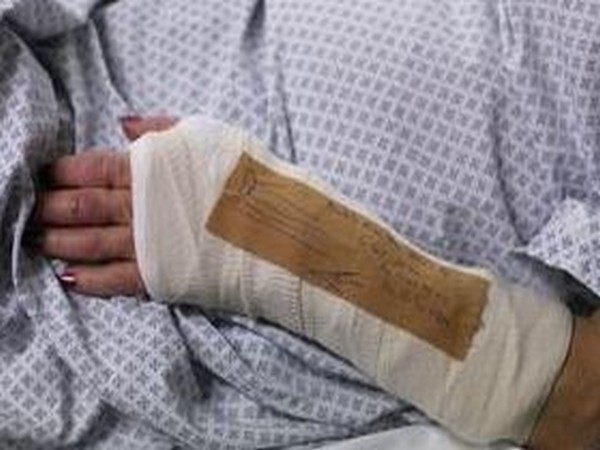 London [UK], November 23 (ANI): While following a vegetarian diet can be healthy, it has to be ensured that enough important nutrients like calcium, B12 vitamin, zinc, iron are included in the diet as it can increase the risk of bone fractures for people following a meatless diet.

According to a study published in the open-access journal of BMC (BIOMED CENTRAL), people who follow a vegan diet, vegetarians, and people who ate fish but not meat lacked calcium and protein required by the body and had a 43 per cent higher risk of bone fractures (total) as well as higher risks of site-specific fractures of the hips, legs, and vertebrae, compared with people who ate meat.
Dr Tammy Tong, Nutritional Epidemiologist at the Nuffield Department of Population Health, University of Oxford, and the lead author said, "We found that vegans had a higher risk of total fractures which resulted in close to 20 more cases per 1000 people over a 10-year period compared to people who ate meat. The risks in vegans were 2.3 times higher than in people who ate meat, equivalent to 15 more cases per 1000 people over 10 years."
A team of researchers at the Universities of Oxford and Bristol, UK analysed data from nearly 55,000 people in the EPIC-Oxford study, who were recruited between 1993 and 2001, many of whom do not eat meat. They were observed over a period of time to understand how certain factors like diet may affect certain outcomes including fracture risk.
Out of the 54,898 participants included in the present study, 29,380 ate meat, 8,037 ate fish but not meat, 15,499 were vegetarians, and 1,982 were vegans at the time they were recruited. Initially, their dietary habits were evaluated at the time of recruitment, and then again in 2010. The candidates were observed continuously for 18 years on average, until 2016 for the occurrence of fractures, the study says.
While assembling the whole observations, the researchers reported total of 3,941 fractures, including 566 arms, 889 wrists, 945 hips, 366 legs, 520 ankles, and 467 fractures at other main sites (clavicle, ribs and vertebrae).
The authors did not observe any major differences in risks among the diet groups for arm, wrist or ankle fractures once BMI was taken into account. Instead, differences in risk of fractures were partly reduced once BMI, dietary calcium, and dietary protein intake had been taken into account.
Dr Tong said: "This study showed that vegans, who on average had lower BMI as well as lower intakes of calcium and protein than meat-eaters, had higher risks of fractures at several sites. Well-balanced and predominantly plant-based diets can result in improved nutrient levels and have been linked to lower risks of diseases including heart disease and diabetes."
While the researchers have already concluded their study in the journal, they are still cautious about the authenticity of the measurement data, on the other hand. According to them, they were unable to differentiate between fractures that were caused by a fall from standing height and those that were caused by accidents.
The data of differences in calcium and protein intake between the different diet groups were also unavailable which is subject to measurement error.
According to the authors, "The study predominantly included white European participants, generalisability to other populations or ethnicities may be limited, which could be important considering previously observed differences in bone mineral density and fracture risks by ethnicity."
On the whole, more studies would be required including different populations from different regions, as well as cohorts with a certain proportion of men and women to explore possible differences causing the risk. (ANI)