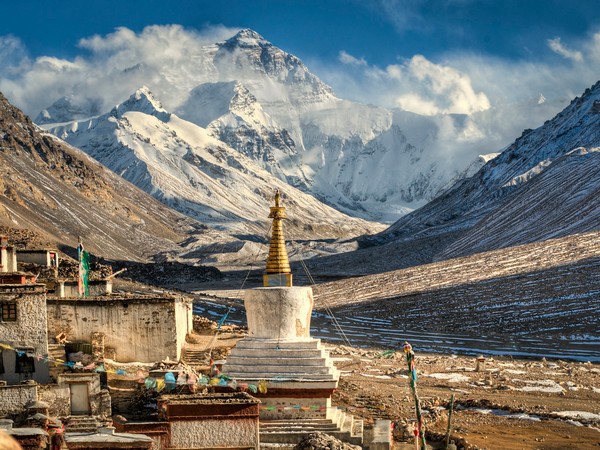 Kathmandu [Nepal], May 10 (ANI): The tweet of Beijing's state-run media agency -- China Global Television Network (CGTN) -- on May 2 claiming that the Mount Everest is on its side has drawn wide criticism in Nepal with the people reacting aggressively to the post.

CGTN's tweet claiming Mount Everest entirely on its side has irked the Nepali citizens who again have started #backoffchina trend over the Twitter where they have been mentioning the Chinese Envoy to Nepal demanding her clarification.
"Dear @PRCAmbNepal don't you think this is fair? We want clarification. #backoffchina," a twitter user @coronanpl tweeted.
Anup Kaphle, Executive Editor of Rest of the World and former Editor-in-Chief of the Kathmandu Post tweeted, "...the world's highest peak located in China's Tibet..." Really bummed we've been taught to believe Everest is in Nepal all these years. Thanks, CGTN."
Political analyst from Kathmandu writing on diplomacy and foreign affairs, who previously worked as journalist Lekhnath Pandey also questioned, "Now, it's China's turn? As if Mount #Everest, aka #Sagarmatha in #Nepal, is solely of #China in TAR!"
"In pictures: An extraordinary sun halo was spotted Friday in the skies over Mount #Qomolangma, also known as Mount Everest, the world's highest peak located in China's #Tibet Autonomous Region," CGTN tweeted along with some photos as it has been carrying out the survey work on its side.
The Mount Everest region, which created a dispute between Nepal and China back in the 1960s over its territory, was claimed on by Kathmandu when then Prime Minister Bishweshwar Prasad Koirala was on a visit to China.
Koirala was summoned by Mao Zedong, chairman of the Chinese Communist Party (CCP) or the founding father of the People's Republic of China. At that time Mao had said to divide the Everest into two equal halves, chat transcript published by China in 1998 states.
"It can be solved, half for each side. The southern part is yours and the northern part is ours," the verbatim recorded then, published in Diplomacy and Foreign Language Press, in 1998 stated.
Mao also had then proposed to rename Mount Everest on the basis of mutual understanding in between the nations. "We shall not call it Everest; that was a name given by Westerners. Neither shall we call it Sagarmatha, nor shall we call it Qomolangma. Let's name it Mount Sino-Nepalese Friendship. This mountain has the highest summit in the world, with a height of over 8,800 meters. The United States, the Soviet Union, and India have no mountain of this height. Only our two countries have. You may hold an internal meeting to discuss the question and air your suggestions. It may be put off for settlement in the future if no agreement is reached," Page no. 307 of the published transcript quoted Mao as saying.
After Mao's reaction, the issue was then diverted into the issue of disputed lands between the two nations and remained unsolved. King Mahendra, who visited Northern neighbour in 1961, announced that the Mount Everest falls squarely inside Nepal.
Mount Everest, the world's highest peak with the height of 8,884 meters, has been the main source of income for the landlocked nation. It was first ascended by Sir Edmund Hillary, an American and Tenzing Norgay Sherpa, a Nepali, on May 29, 1953.
Though there are two ways to get to the top of the world's highest peak, Nepali side (southern) is considered to be most standard one whose permits are issued by the Government of Nepal. (ANI)