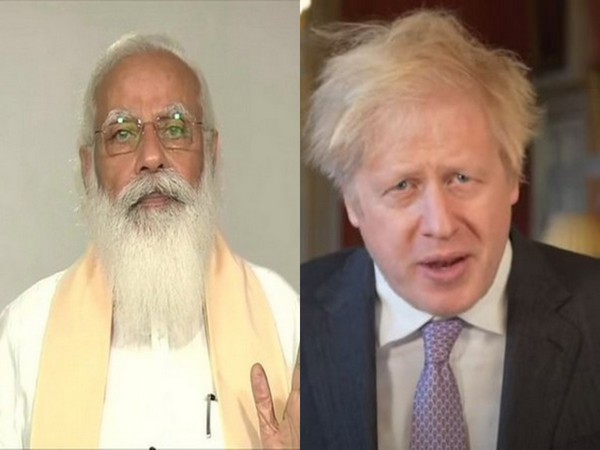 New Delhi [India], May 4 (ANI): In the virtual summit between Prime Minister Narendra Modi and his British counterpart Boris Johnson, both leaders agreed to enhance the India-UK defence partnership with a particular focus on maritime and industrial collaboration.

According to a press release by the British High Commission (BHC), the leaders reaffirmed the benefits of closer cooperation in a free and open Indo-Pacific, recognising their shared interest in regional prosperity and stability.
They agreed to significant new cooperation on Maritime Domain Awareness, which includes new agreements on maritime information sharing, an invitation to the UK to join India's Information Fusion Centre in Gurgaon and an ambitious exercise programme which includes joint trilateral exercises.
The two countries are also working to conclude a Logistics Memorandum of Understanding that will enhance the joint ability to tackle shared challenges.
In addition to commitments on the Indo-Pacific, India and the UK agreed to build on existing government-to-government collaboration on India's future combat air engine requirement.
As part of their '2030 Roadmap', they agreed to work closely together in support of India's indigenous development of the Light Combat Aircraft Mark 2. They also spoke of the potential for further industrial collaboration in areas like maritime propulsion, space and cyber, marking the start of a promising new era of UK-India research, capability and industrial collaboration on Indian combat air and beyond, according to the release.
"This agreement builds upon that signed between Hindustan Aeronautics Limited and Rolls Royce to move aspects of the manufacture of the MT30 Gas Turbine engine to India, supporting PM Modi's Make in India initiative. The MT30 is an engine employed widely in navies around the world and is the basis of the UK's Integrated Electric Propulsion system that powers the Queen Elizabeth Class Carriers," the BHC said.
"The UK and India enjoy a strong defence and security relationship. We remain committed to close collaboration with India as we both adapt to meet future threats and look to innovate our defence equipment programmes and systems," said UK Minister for Defence Procurement, Jeremy Quin MP
The British High Commissioner to India, Alex Ellis, said: "The UK and India are natural partners in defence and security. Today's announcements underline our shared ambition for that partnership, enhancing cooperation, building joint expertise and accelerating industrial cooperation, building up to the arrival of our new aircraft carrier and its accompanying ships to India this autumn."
This comes after the announcement that the UK's Carrier Strike Group 2021, led by HMS Queen Elizabeth, will sail to India in the autumn on its maiden operational deployment.
India and UK on Tuesday agreed a '2030 Roadmap' which will provide a framework for bilateral relations across health, climate, trade, education, science and technology, and defence.
Prime Minister Boris Johnson and Prime Minister Narendra Modi held a virtual summit and agreed on ambitious plans for the next decade of the UK-India relationship.
A BHC statement said the two Prime Ministers have made a historic commitment to strengthen work between the UK and India over the next decade, bringing the two "countries, economies and people closer together and boosting cooperation in areas that matter to both countries".
"This is a defining moment in the UK-India partnership, as we look to rebuild from the economic and health impacts of COVID-19, and lay the foundations for a secure and prosperous decade," said Ellis. (ANI)