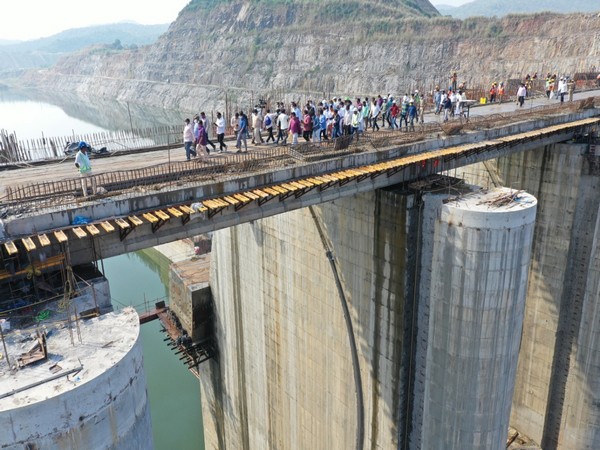 West Godavari (Andhra Pradesh) [India], June 11 (ANI): In what is being seen as a major development in the realisation of the Polavaram project, Godavari river water was released to the delta region through the spillway on Friday.

Officials also conducted a traditional pooja on the occasion.
"We have achieved an important milestone by releasing the Godavari water to the downstream through the approach channel. This is the crucial development in the construction of the Polavaram Project. By overcoming the heavy floods and the COVID crisis, we have achieved the targeted works as per schedule," Ranga Rajan, Associate Vice-President, Megha Engineering & Infrastructures Limited (MEIL), said.
Ranga Rajan also said that they have executed the diaphragm wall at the earliest and closed the cofferdam to meet the government's target to provide water to the Kharif season from June 15.
"We constructed the approach channel, spill channel, spillway in the toughest times," he added.
Alla Nani, Deputy chief minister and minister for health, Anil Kumar, minister for irrigation participated in the event virtually. Narayana Reddy, Engineer-in-Chief, Sudhakar Babu, Chief Engineer, Polavaram Project, and Ranga Rajan, Associated Vice-President, MEIL, were physically present at the event.
"From now onwards, both Godavari districts, Tadipudi, Pattiseema, Pushkaram and other Godavari delta areas, will get the irrigation and drinking water through the approach channel. Until recently, these areas used to get the water through natural river flow," said a statement by the MEIL.
The Godavari river flows between June to December period and large-scale floods occur during the August, September and October months. Godavari receives water from the Sileru and Machkand hydropower plants in summer and reaches the Godavari delta at a minimal level. The water diverted through the approach channel from today merges with the Godavari again through the pilot channel. (ANI)