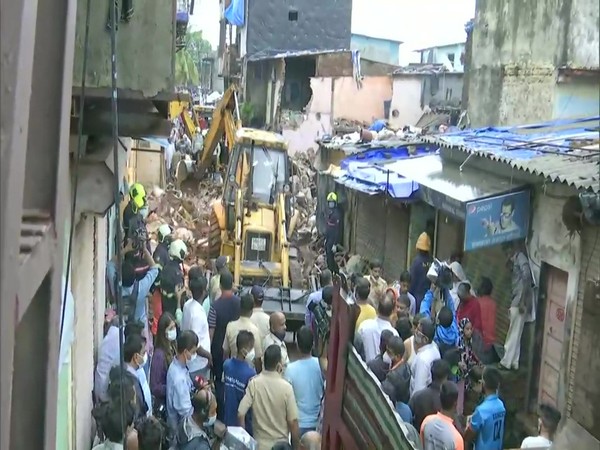 Mumbai (Maharashtra) [India], June 10 (ANI): The Mumbai police will register a case under Section 304 of the Indian Penal Code (IPC) against the owner of the residential structure that collapsed in the New Collector compound in the Malad West area of Mumbai late on Wednesday night.

"Mumbai Police to register a case under Section 304 (2) of IPC (culpable homicide not amounting to murder) against the owner of structure that collapsed and the contractor. They had recently made some structural changes after cyclone Tauktae," Joint Commissioner Police (Law and Order) Vishwas Nangre Patil said.
At least 11 people, including eight minors, lost their lives after a residential structure collapsed on Wednesday night.
As many as 18 people have been rescued safely, while seven people have been injured in the incident.
As per the Brihanmumbai Municipal Corporation (BMC), the collapse engulfed a nearby residential structure. It also affected another residential structure in the area that is now in a "dangerous condition". The building, which is in dangerous condition has been evacuated.
Rescue operations are still underway.
Maharashtra Minister Aslam Shaikh, who has also reached the incident site, said, "Buildings have collapsed due to rain. Rescue operation is underway. Injured people have been shifted to the hospital. Debris of the buildings is being removed to see if more people are stuck under it."
"It is an unfortunate incident. It was a G+2 building that fell on another building. 18 people have been rescued, of whom 11 died. Police will carry out a proper investigation and take further action," Additional CP Dilip Sawant said.
Siddiqui, a local present at the spot, said the incident took place around 10 pm.
"The incident took place around 10:15 pm. I came out after two persons asked us to leave the building. As I was rushing out, I saw three buildings including a dairy had demolished near our building," he said. (ANI)