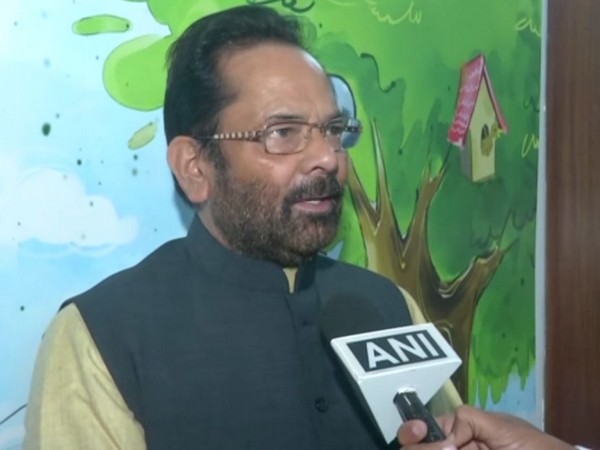 New Delhi [India], Mar 26 (ANI): With half of their staff on duty and no visitors allowed in waiting halls, many top leaders of Bharatiya Janata Party (BJP) who are under quarantine due to the extended lockdown are exploring ways to keep themselves busy.
Following Prime Minister Narendra Modi's advice to stay indoors, a few of them are spending time with their family. While others explored household chores, including cooking as a revision of their student days.
Mukhtar Abbas Naqvi, Union Minister for Minority Affairs, keeps himself busy these mornings by gardening.
"I used to do this. But after the gardeners sent home, I am taking care of the kitchen garden myself," said Naqvi while taking out a bunch of beetroots and salad leaves along with broccoli from his garden.
Mahendra Nath Pandey, Minister of State for Skill Development And Entrepreneurship too has his hands full as his cook has gone on leave.
"I used to cook when I was in the hostel. It has been 12 years that I have entered the kitchen as I have sent my cook on leave and my family is in Varanasi. So, I ventured into my kitchen and made kathal ki subzi (jackfruit). I also making tea apart from ensuring that work in my ministry should not stop," Pandey added.
Whereas many are spending time to improve their health by indulging in activities like yoga and others to strengthen their immunity and keep fit.
Kailash Choudhary, MoS for Agriculture, starts his day with Jal neti and yoga. Apart from yoga, he takes out time to get in touch with his other size a farmer and spend some time in fields of PUSA Institute (Indian Agricultural Research Institute) where he is staying at present. However, much of his time goes to addressing complaints by people stuck in other states and countries.
Senior party leader Om Prakash Mathur says he is busier than regular days as he is coordination with state unit of Rajasthan and others to ensure that poor and daily wage labourers don't go hungry in the lockdown.
"We have got in touch with Gurudwaras, Salasar temple management which runs a community kitchen. Plus, many of our people work in South India so we have to ensure that they get food and lodging, " said the BJP's Uttar Pradesh in-charge. Apart from this, Mathur is busy reading books that he wanted to read for quite some time.
Free from attending recently concluded Parliament session, Delhi BJP chief, Manoj Tiwari is reading books on Ayurveda. "Coronavirus starts from the respiratory system and impacts it. Ayurveda may have medicines that could alleviate the symptoms, " says Tiwari. He is also working on his singing and writing lyrics for a few songs.
There are many who have kept themselves busy with official work. Take Information and Broadcasting Minister Prakash Javadekar. He held a meeting with his senior officials via audio bridge.
"He is engaging the officials to give suggestions on how to materialise the vision document of three ministries he holds," said the minister's close aide.
In his address to the nation on Tuesday, Prime Minister Narendra Modi had announced a 21-day lockdown in the entire country beginning Tuesday midnight to deal with the spread of coronavirus, saying that "social distancing" is the only option to deal with the disease, which spreads rapidly.
The total number of people who have been confirmed positive for COVID-19 in India has risen to 649, according to the recent update by the Union Ministry of Health and Family Welfare (MoHFW) on Thursday morning. (ANI)