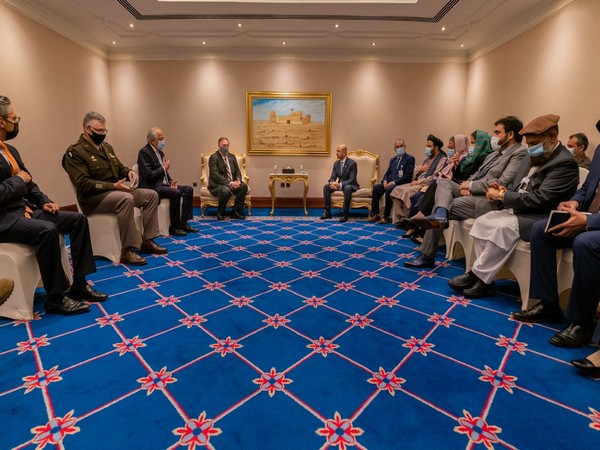 Doha [Qatar], November 22 (ANI): US State Secretary Michael Pompeo on Saturday met negotiating teams of Taliban and Afghanistan government in Doha and called for a significant reduction in violence as well as encouraged expedited discussions on a political roadmap and a permanent ceasefire.

Pompeo visit to Doha comes in wake of a rocket attack in the capital of Kabul. Earlier on Saturday, 23 rockets struck various part of Kabul, killing eight people. The ISIL (ISIS) affiliate in Afghanistan claimed the responsibility for the attack.
"Met with both Taliban and Islamic Republic of Afghanistan's negotiating teams in Doha. I commend both sides for continuing to negotiate and for the progress they have made. I encourage expedited discussions on a political roadmap and a permanent and comprehensive ceasefire," Pompeo tweeted.
The outgoing top US diplomat is on a seven-nation tour of Europe and the Middle East as President Donald Trump shores up late-term priorities.
Earlier this week, the Trump administration has announced drawdown of over 2,000 of its troops deployed in Afghanistan.
The negotiation teams of Afghanistan and Taliban are holding talks in Qatar since mid-September to restore peace in the war-torn nations. However, the talks have faltered amid disagreements about the agenda, the basic framework of discussions and religious interpretations.
The Taliban insisted that in case a dispute emerges during the negotiations, the solution must be sought using the Hanafi jurisprudence and the foundation of the talks must be based on the deal the Taliban signed with the US in February.
However, the Afghan government's team rejected the demands and gave alternate suggestions. (ANI)