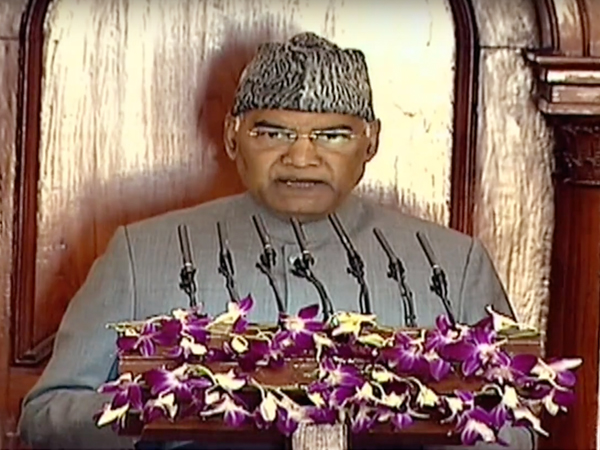 New Delhi [India], Jan 31 (ANI): President Ram Nath Kovind on Friday referred to the dream of India's first Prime Minister Jawaharlal Nehru of creating modern India in his address to the joint sitting of both the Houses of Parliament and called upon the people to work with new energy in this decade to give impetus to making of New India.

The President said that the decade was extremely important for India and the government has laid a strong foundation to make it India's decade.
"In this decade, we will complete 75 years of our independence. In this decade, we all have to work together with new energy to give impetus to the making of a new India. With the efforts of my Government, a strong foundation has been laid in the last five years, to make this decade India's decade and this century India's century," he said.
He referred to dreams and vision of Mahatma Gandhi, Dr Babasaheb BR Ambedkar, Sardar Vallabhbhai Patel, Deen Dayal Upadhyaya and Ram Manohar Lohia apart from Nehru.
"Whether it is Pujya Bapu's dream of Gram Swaraj, Babasaheb Ambedkar's principle of social justice, Nehruji's dream of creating a modern India, Sardar Patel's resolve for Ek Bharat- Shreshtha Bharat, Deen Dayal Upadhyaya's goal of Antyodaya, Lohiaji's vision of social equality, we the people of India will together make these dreams a reality," he said.
Leaders of ruling BJP have been critical of some decisions of Nehru and have blamed him for Article 370, which gave Jammu and Kashmir special powers and has now been repealed.
The President said museums to celebrate contributions of tribals who played a role in freedom struggle were being set up in different states.
"It is the belief of my Government that paying tribute to the great personalities who dedicated their lives to the nation and contributed towards preserving the heritage of the country is an important part of nation-building. With this idea, museums celebrating the contributions made by the brave tribals, both men and women, during our freedom struggle are being set up in different States," he said.
The President said that 250th birth anniversary of the great social reformer Raja Ram Mohan Roy, whose teachings guided the nation, will also be celebrated in 2022 by the Government in a befitting manner. (ANI)