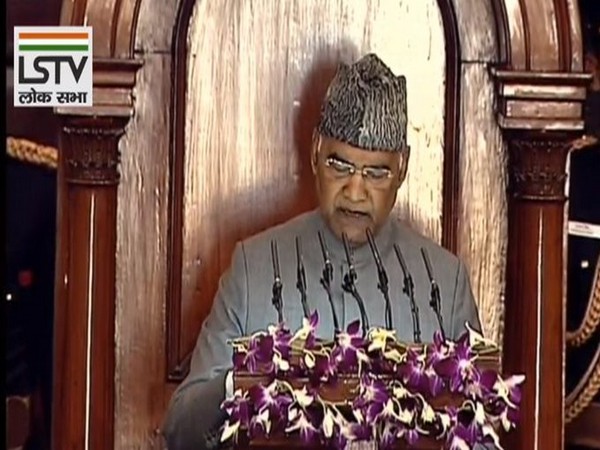 New Delhi [India], Jan 31 (ANI): President Ram Nath Kovind on Friday condemned the atrocities on minorities in Pakistan and called upon the world community to take cognisance of it and take necessary steps.

In his address to the joint sitting of the two houses of parliament, the President referred to the recent incident of vandalism at the Nankana Sahib Gurdwara in Pakistan which was strongly condemned by India.
He said there has been an increase in atrocities on minorities in Pakistan over time and there was a need to bring it to the notice of the global community.
"We have all been witness to the increase in the atrocities on minorities in Pakistan over time. We have all seen what happened in Nankana Sahib recently. It is the responsibility of all of us to bring the atrocities being committed in Pakistan to the notice of the global community," he said.
"While condemning the atrocities on the minorities in Pakistan, I urge the world community to take cognisance of it and take necessary steps in this regard," he added.
The President made the remarks after mentioning the enactment of the Citizenship Amendment Act (CAA).
He said the enactment of CAA was the fulfillment of Mahatma Gandhi's assurance that Hindus and Sikhs of Pakistan, who do not wish to live in Pakistan, can come to India.
His remarks concerning CAA were cheered by treasury benches with a long thumping of desks. However, some opposition members raised slogans.
Kovind said India has always believed in the principle of equal respect for all faiths but at the time of partition, "this very belief of India and of its people came under the most severe attack".
"In the environment prevailing in the aftermath of partition, the Father of the Nation Mahatma Gandhi had said: `Hindus and Sikhs of Pakistan, who do not wish to live there, can come to India. It is the duty of the Government of India to ensure a normal life for them.' Many national leaders and political parties have from time to time supported this idea of Pujya Bapu and further propagated it," the President said.
"It is our responsibility to honour this wish of the founding fathers of our nation. I am happy that both the Houses of Parliament have fulfilled this wish, by enacting the Citizenship Amendment Act. At a time when the country is celebrating the 150th birth anniversary of Gandhiji, all of you have given paramount consideration to this sentiment. I congratulate both the Houses of Parliament and all the MPs for this," he added.
The CAA enables non-Muslim refugees from Pakistan, Afghanistan and Bangladesh to get Indian citizenship if they have arrived before December 31, 2014. (ANI)