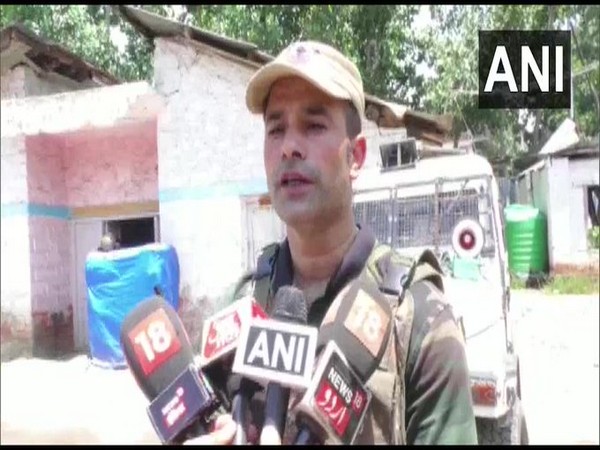 Sopore (Jammu and Kashmir) [India], July 1 (ANI): It was the police's priority to evacuate the child during the terrorist attack and it was very challenging as terrorists were firing upon policemen, said Azim Khan, SHO Sopore on Wednesday.

"When we reached the site, what we saw was disturbing. Our priority was to evacuate the child. It was very challenging as terrorists were firing upon us. The child was going to Handwara with his grandfather," Khan said while speaking to media.
The police rescued 3-year-old child during the attack.
Earlier in the day, a Central Reserve Police Force (CRPF) jawan and a civilian lost their lives after terrorists fired upon a CRPF patrolling party in Sopore.
Two of the injured CRPF jawans are known to be in critical condition. Three CRPF personnel were also injured in the attack, CRPF added.
According to the CRPF, at around 7:30 am today, 179 Battalion of CRPF reached Model Town Chowk Sopore for naka/patrolling duties.
As the troops were de-bussing from the vehicles to occupy their respective spots of deployment, terrorists hiding in the attic of a nearby mosque started firing indiscriminately on the troops, in which CRPF jawans constable Bhoya Rajesh, Head Constable Deep Chand Verma, Nilesh Chawde and Constable Deepak Patil got injured. Later Deep Chand succumbed to his injuries.
Explaining the circumstances, a senior CRPF official told ANI that when terrorists fired at the CRPF party, two vehicles immediately moved in and took positions facing the terrorists who were firing from a height using floors of the mosque.
"CRPF troops after taking positions saw a civilian vehicle coming in the range of terrorists firing. The deceased came out from his vehicle and tried to hide, taking cover of his vehicle. But, the terrorists who were in front of him fired at security forces and the deceased was caught in the firing of terrorists," the official said.
"Later, a child who was deceased's relative sat on his body and was rescued by security forces. In a picture also, it is evident that the security force personnel signalling the child to come close to him and the jawan has faced his weapon in front as the fire was coming from the mosque," he said. (ANI)