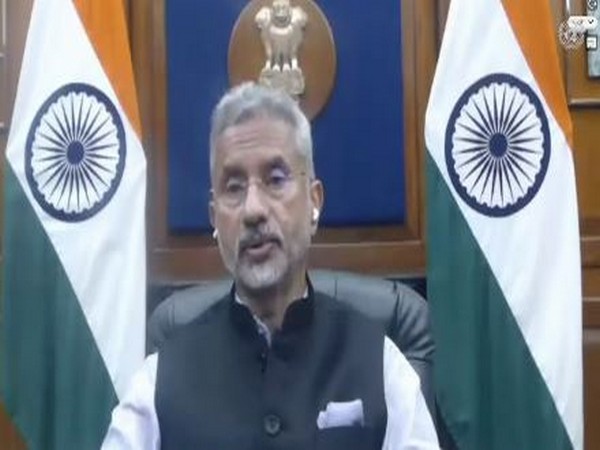 New Delhi [India], September 15 (ANI): Ahead of a maiden in-person meeting called by US president Joe Biden in Washington later this month, India said Quad should not be perceived as a grouping with limited agenda as it has a broad and substantive agenda.

Speaking to US-based academician Ashley Tellis on the Indian Ocean and its impact on regional security, External Affairs Minister (EAM) S Jaishankar said, " Rebalancing, need to treat Indo-Pacific in a more integrated manner, the political reflection of all these changes are expressed in Quad. Again I want to highlight Quad has agenda that extends to multiple domains, much broader cooperation. And to make it in a sense to give it a sharp edge and a very limited agenda partly is gamesmanship of critics. But it partly also headlines kind of attitude and not a full understanding of really what is happening because as we see later on in the month, I think Quad has an increasing agenda and a substantive agenda in multiple spheres of activities ."
Prime Minister Narendra Modi would be participating in the Leaders' Summit of the Quadrilateral Framework in Washington along with his US, Japanese and Australian counterparts on September 24.
Jaishankar further said, "Without diminishing Quad, what I also wanted to point out Quad is not limit there are other plurilateral in the world. There are other plurilateral in the Indo-Pacific region. We have a plurilateral which means more than two arrangements with Australia and Japan and also with France Indonesia, Sri Lanka, Maldives. So this is a larger generic point on evolution on the international order that as multilateralism shows an inability to address key issues of the day and as bilateralism has its mix I think that gap today is increasingly going to be filled by an understanding of the willing and the cooperative."
Remarks from Indian External Affairs are significant as it comes after China slammed Quad and said the formation of "exclusive cliques" targeting other countries runs counter to the trend of the times and is "doomed to fail".
When asked about fragmentation and unification in the region by the think tank representative, EAM Jaishankar emphasised on cooperation reflected by Quad nations, he said,"Quad as an example it is an effort of cooperation, the effort of cooperation between four countries who are located on the four corners of Indo-Pacific but are all impelled by a sense of responsibility. Our duty towards a global cause who have a comfort towards each other. Each one of us made an extra effort, it wasn't something predestined. In fact, recent history was a little different. We all tried to overcome that approach of global responsibility with a more open mind. There are other efforts East Asia Summit and ASEAN also add to this."
"In a sense, I would argue fragmentation and unification are extreme positions. As very often best answers lie somewhere in the middle. That is why the middle path embodies so many virtues. To me getting the balance right to create much more participatory, much more consultative, in a sense much more coordinated, cooperative kind of Indo-Pacific," he added.
Jaishankar said, "Some weeks ago I had spoken at some length contrasting how Europe has dealt with these challenges than Asia. The fact is that we in Asia are struggling for a variety of reasons, a lot of it you are going to see now which you are already seeing these are those efforts. It's a big region. Very complicated region. It will have many building blocks of many kinds and the right thing is to be open to all of them rather than get into binary of with me against me kind of thing."
He also said India has acquired the position of the first responder in the Indian Ocean region. He underlined the Indian Ocean itself historically had an organic unity that's very important today for Indian Ocean countries to recall and refresh, it was a very pluralistic culture of the Indian Ocean.
"Considering we have such a large coastline, the vast expanse of ocean below us, so many islands. It's interesting in only 2015 India adopted a comprehensive strategy and this was done when Prime Minister Narendra Modi went to Mauritius in March 2015, now it is named Sagar. It has created outlook cutting across bureaucracies and departmental silos," the minister added. (ANI)