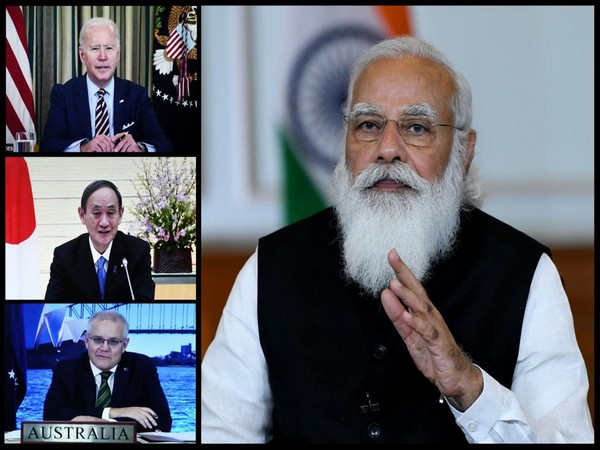 Washington [US], September 24 (ANI): Leaders of Quad countries are likely to discuss a variety of issues like 5G technology, climate change, critical infrastructure, supply chains and regional security as well as Afghanistan during their summit meeting on Friday.

US President Joe Biden will host Quad Leaders' Summit which will be attended by Prime Minister Narendra Modi, Australian Prime Minister Scott Morrison and Japanese Prime Minister Yoshihide Suga.
The four-nation grouping has a vision for a free, open, transparent and inclusive Indo-Pacific.
Sources said today's summit will touch upon a variety of subjects like 5G technology, climate change, critical infrastructure, supply chains and regional security.
Earlier today, President Biden mentioned that Afghanistan will be one of the topics of discussion.
Prior to leaving Japan to attend the Quad Summit, Prime Minister Yoshihide Suga told reporters that the Quad meeting will seek a path to a free and open Indo-Pacific through discussions on important issues including coronavirus vaccines, new technologies, and climate change.
Suga said they also intend to discuss responses to the Taliban's takeover of Afghanistan and North Korea's ballistic missile launches.
A senior US administration official said during yesterday's press call that there will be an announcement on the launch of a new working group on space.
A source familiar with the planning of today's Quad Summit stressed that although China may come up during the talks, the Quad "stands for something and not against something; it is not targeting any one country."
In regards to concerns about the impact that the formation of AUKUS, a trilateral security pact between Australia, the United Kingdom, and the United States, might have on the Quad given their overlapping objectives, a senior administration official said that the two partnerships have completely separate initiatives and the Quad does not have a military or security dimension to it.
The leaders are expected to each give brief remarks at the top of the pool spray and they are also scheduled to meet Vice President Harris in the Vice President's Ceremonial Office.
The Quadrilateral Security Dialogue, also known as the Quad, was first initiated in 2007 by then Japanese Prime Minister Shinzo Abe, with the goal of peace and security in the region. The same year, the Quad nations plus Singapore participated in an expanded version of the Malabar naval exercises in the Bay of Bengal, but the group soon disbanded when Australia withdrew from formal discussions in 2008.
The Quad was revived a decade later under the Trump administration in 2017. Chinese Foreign Minister Wang Yi scoffed at the Quad alliance in 2018, saying it was "like sea foam in the Pacific or Indian Ocean" and that although the partnership may get some attention, "it will soon dissipate".
Despite criticism from China, the Quad held its first foreign ministerial meeting in New York on September 26, 2019.
A virtual summit of leaders was held in March this year. (ANI)