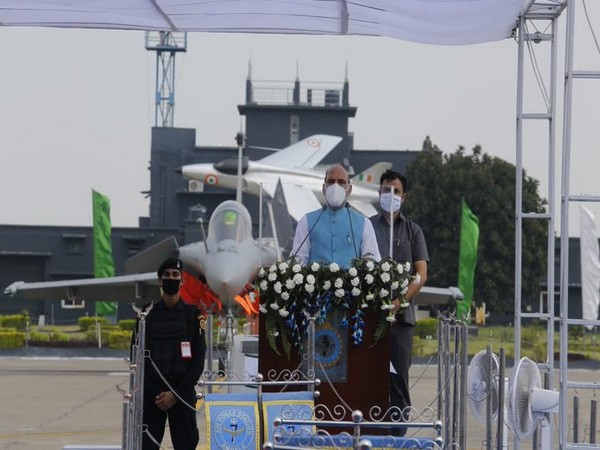 Ambala (Haryana) [India], September 10 (ANI): Congratulating the Armed Forces and the countrymen on the formal induction of Rafale in the Indian Air Force (IAF), Defence Minister Rajnath Singh on Thursday said that it sends a "big and bold message" to those who are "eyeing our sovereignty".

"It's induction today is a big and bold message to the whole world, especially to those who are eyeing our sovereignty. This induction is especially important because of the existing situation at our borders, which if I put in simple words has been created in the last few days. We fully understand that with the changing times we will also have to keep preparing ourselves," the Defence Minister said.
He also asserted that with Rafale's induction the IAF's capabilities will be revolutionalised with the "technological edge" and said that it marked strengthening of India-France relations.
"Rafale's induction in the Air Force is an important and historical moment and it is a matter of pride for us to be witness to this moment. I congratulate the Armed Forces, and all countrymen on this occasion. The induction of Rafale in IAF's fleet shows the strong relations between India and France. India and France have been economic, cultural and strategic partners since long. Our faith in strong democracy and a wish for world peace are the basis of our relation," Singh said at the induction ceremony being held at the IAF airbase in Ambala.
The Defence Minister recounted the feats achieved by the IAF using earlier French fighter aircraft during the war with Pakistan in 1965, and then again during the 1999 Kargil war.
He also thanked Prime Minister Narendra Modi for his far-sightedness which has resulted in India getting the aircraft within the right time.
Singh further said that India's responsibility was not limited to just its territorial boundaries but to the whole of "Indo-Pacific region and Indian Ocean Region as a responsible nation", and it was committed to maintaining world peace and cooperating with the international community.
"I am pleased to say that India and France have the same perspective on this region's security concerns, under which we are cooperating with each other to deal with common challenges like maritime traffic security and piracy. We also have common views on UN Security Council's fight against expansion and terrorism. Shakti, Varuna and Garuda series of exercises, shows our efforts against non-state actors by our armed forces," Singh said.
He added that the two countries also had partnerships in Defence Cooperation in other areas, mentioning the building of six Scorpene-class submarines in Mazagaon docks, under technology transfer, under implementation.
The Defence Minister also invited French Defence Industries to invest in the Indian defence sector, and spoke about manufacturing defence-equipments under the strategic-partnership model, through the automatic route with 74 per cent Foreign Direct Investment (FDI).
"I have full faith that French Defence Industries will take benefit of this and France will be a partner in our journey of indigenisation. Scorpene and Rafale's experience will definitely give speed to increase our defence partnership. Our relations have reached a new level of cooperation. I hope that the MoUs signed between our countries will boost the economies of both the nations, and will set up and a complete eco-system of aerospace MSMEs in India," he said.
Earlier, Air Force Chief Air Chief Marshal RKS Bhadauria had also spoken at the Rafale's induction ceremony.
Water cannon salute was given to the five Rafale aircraft at the Indian Air Force (IAF) base, Ambala during the induction ceremony on Thursday.
Defence Minister Rajnath Singh and Minister of the Armed Forces of France Florence Parly also witnessed the traditional 'Sarva Dharma Puja' at the Rafale induction ceremony.
Chief of Defence Staff General Bipin Rawat, among other senior officers of the Ministry of Defence and Armed Forces, were also present to mark a very important milestone in the history of the IAF. (ANI)