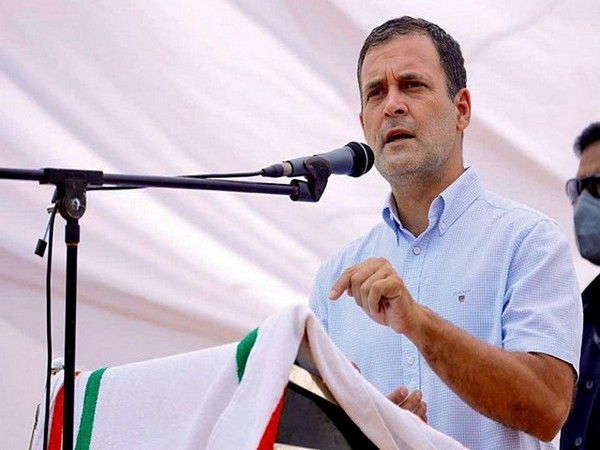 New Delhi [India], July 21 (ANI): Congress leader Rahul Gandhi on Wednesday slammed the Centre for not giving an ex-gratia to bereaved families of those who lost their lives in the farmer's protests. He said that everything is recorded in the tears of family members who lost their loved ones.

In a tweet in Hindi, Gandhi wrote, "Apanon ko khone vaalon ke aansuon mein sab record hai (Everything is recorded in the tears of those who have lost loved ones.)"
Gandhi, in the tweet, was referring to an article wherein it was mentioned that families of those farmers who lost their lives during the farmer protest have not been provided any ex-gratia/incentives by the government.
Meanwhile, farmers are all set to hold 'Kisan Parliament' at Jantar Mantar in New Delhi from July 22 as part of their protest to scrap the new agriculture laws, a farmer leader said on Tuesday after a meeting of farmer unions with Delhi Police personnel. As many as 200 farmers will attend 'Kisan Sansad' every day.
"A meeting was held today. The administration put forth their views and we kept ours. It's been decided that our 'jatha' of 200 people will go there. No discussion over permission, things are being discussed, can't say anything now. There is a possibility of another meeting," farmer leader Balbir Singh Rajewal briefed media on the meeting with Delhi Police.
During several rounds of talks between the farmer leaders and the Centre, no concrete result has been achieved so far. (ANI)