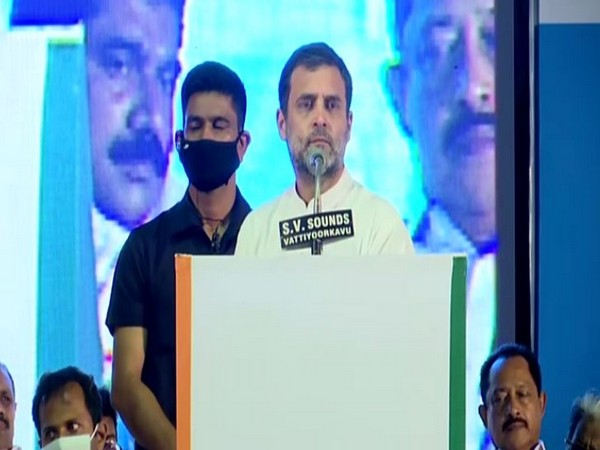 Thiruvananthapuram (Kerala) [India], February 23 (ANI): Congress leader Rahul Gandhi on Tuesday slammed BJP-led central government and LDF government in Kerala and said the party will come up with the "people's manifesto" for the forthcoming assembly which will reflect the voice of the residents of the state.

Addressing an event on the conclusion of 'Aishwarya Kerala Yatra', the Congress leader indicated that the manifesto will talk about 'Nyay', a term that the party had used ahead of 2019 elections for its proposed minimum income guarantee scheme for the poorest sections.
"Congress party is building a people's manifesto. It will not be UDF's manifesto but the manifesto of the people of Kerala. We are meeting thousands and thousands of people in the state and they are telling us what they want us to do. In some time, you will see the results of the work we are doing," Gandhi said.
He slammed the Centre and accused it of "destroying the lives of farmers".
"We have a document that we all be proud of and it will contain the voice of the people of Kerala. In that document, there will be the idea of 'Nyay'. There will be a line that will speak about the cashless treatment of our people. There will be a line that will speak about insurance for everyone. There will be no line saying we are going to destroy the lives of farmers like what the Centre is doing," he said.
He alleged collusion between the central government and CPI(M)-led LDF government and claimed that the probe in gold smuggling case was moving "slowly".
"There's one thing I don't understand. Why is it that the cases against the Left government, against a person who works in the Kerala CMO, are progressing so slowly? Why is it taking so long? Why are agencies like CBI and ED not attacking the Left government? When you fight the BJP, the BJP attacks you all the time," he said.
"There is only one reason the BJP is going slow in these cases and you all can figure out what that reason is," he added.
He accused BJP of working against the interests of small and middle-sized businessmen, shopkeepers and farmers.
"Over the last six years, the backbone for job creation has been broken, smashed into pieces. Who are the people who give India jobs? Small businesses, middle-sized businesses, shopkeepers, farmers. And the BJP is working against them all," he said.
Gandhi also talked about his experience as a Member of Parliament (MP) from Kerala.
"For the first 15 years, I was an MP in the north. I had got used to a different type of politics. For me, coming to Kerala was very refreshing as suddenly I found that people are interested in issues not just superficially but they like to go into detail about issues.
"I was talking to some students in the United States and I said to them I really enjoy going to Kerala. It's not just affection but the way you do your politics, the intelligence with which you do your politics. So, for me, it's been a learning experience and a pleasure," he said.
Kerala is likely to face assembly elections in April-May this year. (ANI)