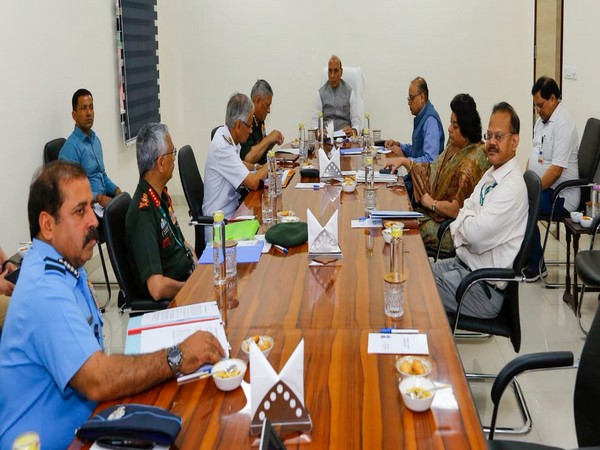 Officials briefed the minister on various measures and assistance provided so far. The Indian Air Force has made several sorties and evacuated Indian nationals from affected areas in China, Japan and Iran.
Various quarantine facilities of the Armed Forces have so far handled 1,462 evacuees and discharged 389 persons.
At present, 1,073 persons are being provided care at the facilities in Manesar, Hindan, Jaisalmer, Jodhpur and Mumbai.
A Defence Ministry release said that additional quarantine facilities with a capacity of 950 beds were on standby.
The meeting was attended by Chief of Defence Staff General Bipin Rawat, Chief of Naval Staff Admiral Karambir Singh, Chief of Air Staff Air Chief Marshal RKS Bhadauria and Chief of Army Staff General M M Naravane.
Rajnath Singh appreciated the "proactive role" played by armed forces and various departments of Defence Ministry in evacuating Indian nationals as well as foreigners from COVID-19 affected countries.
"e urged the armed forces and other departments to gear up their preparedness and provide all required assistance to the civilian administration at various levels.
The release said Defence Research and Development Organisation (DRDO) laboratories have manufactured 20,000 litres of sanitiser and supplied to various organisations, including 10,000 litres to Delhi police. DRDO has also supplied 10,000 masks to Delhi police personnel," it added.
It said that DRDO is tying up with some private companies to make personal protection equipment such as bodysuits and ventilators.
Ordnance Factory Board has also ramped up production of sanitizers, masks and body suits. Bharat Electronics Limited is also engaged in manufacturing of ventilators.
The release said that Army medical teams deployed in the Maldives have since returned after completion of their mission.
It said Army medical teams and two ships of Navy are on standby to provide the required assistance to friendly countries in the neighbourhood. (ANI)