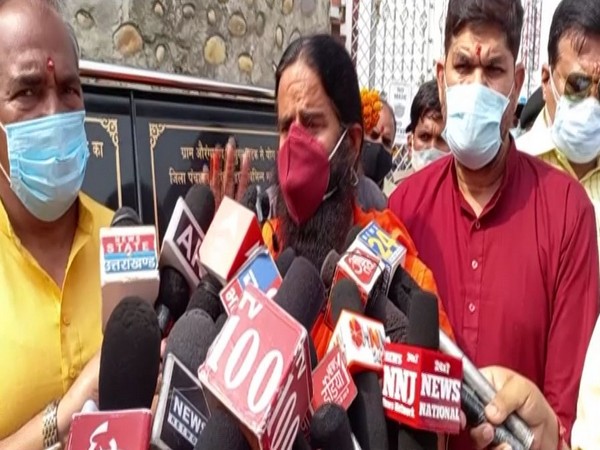 Haridwar (Uttarakhand) [India], June 10 (ANI): Lauding Prime Minister Narendra Modi's announcement of centralised COVID-19 vaccination drive for all adults and administering Covid vaccines free of cost at government hospitals for adults from June 21, Yoga guru Ramdev on Wednesday urged everybody to get vaccinated and stated that he too will take the jab soon.

He stated that people should practice yoga and Ayurveda which will act as a shield against diseases and will prevent COVID casualties.
"Prime Minister Narendra Modi has made a historic announcement of vaccinating every citizen free of cost from June 21. Everybody should get vaccinated. Also, people should practice yoga and Ayurveda which will prepare a protective shield against disease and will also prevent COVID casualties. I will also get vaccinated soon."
Commenting on the drug mafia, he said, "We cannot be at enmity with any organisation. And all the good doctors are all messengers sent by God on this earth. They are a gift to this planet. But if a person being a doctor does anything wrong then that is the fault of that individual. Pradhan Mantri Jan Aushadh stores had to be opened because drug mafias have opened fancy shops where they are selling unnecessary medicines at very high prices instead of basic and necessary ones."
"Our fight is not with the doctors of the country, the doctors who are opposing us, they are not doing it through an institution," he added.
After controversy over allopathy and Ayurveda, the yoga guru stated that there was no doubt that allopathy is better in terms of emergency cases and surgeries but Ayurveda treats incurable diseases.
"We want that nobody should be harassed in the name of medicines and people should refrain from unnecessary medication. There is no doubt that allopathy is better for emergency cases and surgeries. But other life-threatening diseases, incurable disorders can be cured through ancient practices listed in Yoga Ayurveda, which is not a matter of argument," said Ramdev.
As the Uttarakhand government announced certain relaxations amid the ongoing COVID-induced curfew, Baba Ramdev requested the state government to allow Char Dham Yatra with COVID guidelines.
He said, "Some relaxation has been given by the state government during the Corona curfew, but the Char Dham Yatra has not started yet. The government should now start the Char Dham Yatra following COVID guidelines. Business should not be affected due to the lockdown."
Meanwhile, The Indian Medical Association (IMA) on Wednesday wrote to the Indian Council of Medical Research (ICMR) against yoga guru Ramdev alleging him of making "Unprovoked demeaning and prejudicing utterances against modern medicine".
The controversy started with a video, floating on different social media sites, showing Ramdev terming modern allopathy "a stupid and failed science".
Last week, the IMA had appealed to Prime Minister Narendra Modi to take appropriate action under sedition and other charges against Ramdev for allegedly "spearheading a misinformation campaign on COVID vaccination".
The IMA had sent a legal notice to yoga guru Ramdev over his alleged statements against allopathy and "defaming" scientific medicine. However, the Patanjali Yogpeeth Trust has denied allegations by the IMA that Ramdev has misled people by making "unlearned" statements against allopathy and defamed scientific medicine.
On May 23, Ramdev had withdrawn his statements on allopathic medicine after receiving a strong-worded letter from Union Health Minister Dr Harsh Vardhan who called his remarks "inappropriate".
According to the Haridwar-based Patanjali Yogpeeth Trust statement, Ramdev was reading out a WhatsApp forwarded message in the video that has gone viral on social media. (ANI)