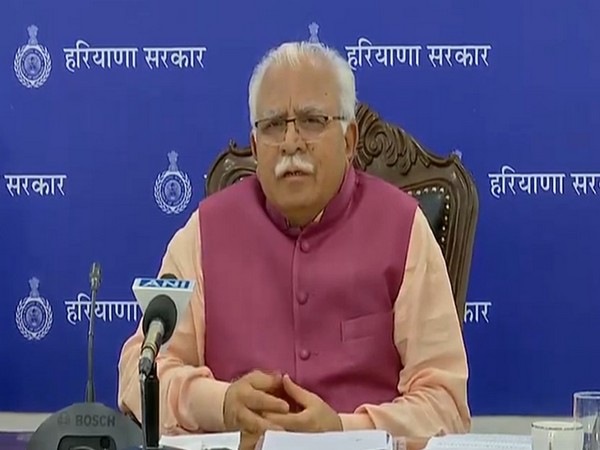 Chandigarh (Haryana) [India], October 17 (ANI): Haryana Chief Minister Manohar Lal Khattar said on Saturday that in the last six years, recruitment on about 85,000 government posts has been done on a merit basis.

Addressing a press conference called at Haryana Niwas here today, the Chief Minister said that likewise, in the next five years, too, merit-based recruitments will be done on more than one lakh posts.
"While all these efforts have certainly proved fruitful be it conducting of recruitment on Merit Basis or implementing teacher transfer policy. These initiatives taken by Haryana to bring about reforms have been appreciated at the national level," he said.
The Chief Minister expressed confidence that the employees who are recruited on the basis of merit will surely meet the expectations of the public and will stay away from corrupt practices.
Responding to a question, Manohar Lal Khattar said that to speed up the pace of development in rural areas, separate District Municipal Commissioners have also been appointed in Urban Local Bodies after appointing a separate Chief Executive Officer (CEO) of Zila Parishad. This is also helping to augment the financial resources of these institutions.
He said that earlier, Urban Local Bodies used to remain dependant on the fact that they would get a grant from the Central Finance Commission or the State Finance Commission for their budget. Now they are mobilising their own resources. He said that public participation in the bodies will too be encouraged.
The Chief Minister said that there is a link between distilleries and liquor contractors who operate in different states. He said that although there is no distillery in Chandigarh, there are many bottling plants, from where liquor is supplied in other states, said Manohar Lal Khattar while responding to a question regarding the liquor scam. He said that CCTV cameras have been installed in the distilleries of Haryana. Also, the joint patrolling teams of the Police and the Excise and Taxation Office monitors the supply of alcohol.
He informed that in the year 2014-15, Excise revenue was Rs 3200 crore which has so far increased to Rs 6400 crore in the year 2020-21 and it is estimated that it will be Rs 7000 crore. The increase in revenue indicates that the State Government has certainly reformed the systems.
Responding to another question, Chief Minister said that even after lockdown, a revenue of Rs 338 crore has been received from GST, VAT and Mining, which was Rs 330 crore last year.
Transport Minister Mool Chand Sharma, Principal Secretary of Transport Department Anurag Rastogi and other officers were also present on this occasion. (ANI)