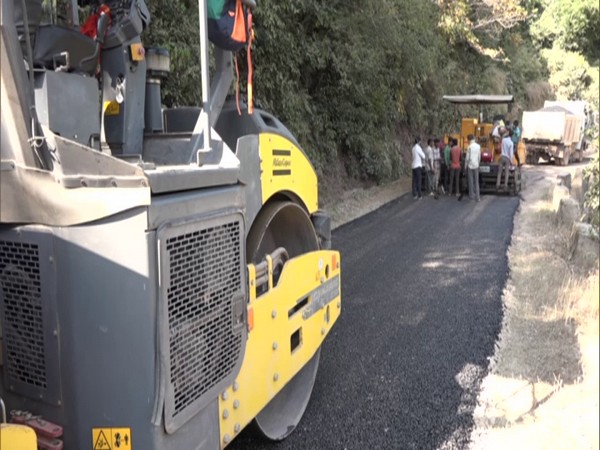 Udhampur (Jammu and Kashmir) [India], October 18 (ANI): For the first time, residents of Badole village and adjoining areas in Jammu and Kashmir's Udhampur district have a proper blacktopped road, thanks to the Pradhan Mantri Gram Sadak Yojana (PMGSY) of the Central government.

While speaking to ANI, locals expressed elation and gratitude to the government for the step as they had faced several problems due to kaccha roads.
"This road used to be really terrible earlier. There were a lot of holes and bumps and in the rainy season, it used to be very dangerous. With this new road our children will be able to go to school directly instead of having to take the longer route," Sunil Daya, a resident of Badole, told ANI.
He further informed that the road was about 8.5 kilometers long and 6-7 metre wide.
"Young children and sick people were unable to reach schools and hospitals easily, and commercial vehicles also could not reach. We have never had proper road connectivity in our village. It feels like we have received new life after several years now that we have access to better roads," Daya added.
According to Amit Sharma, a boy who lives in the village, children used to face a lot of problems in travelling to and from school due to the terrible condition of the road.
"This road used to be kaccha (dirt road). Cycles also couldn't go on this road, let alone cars. On their way to school, kids sometimes fall and hurt themselves, and soil their uniforms. I am grateful to the Prime Minister for this initiative," Sharma said. (ANI)