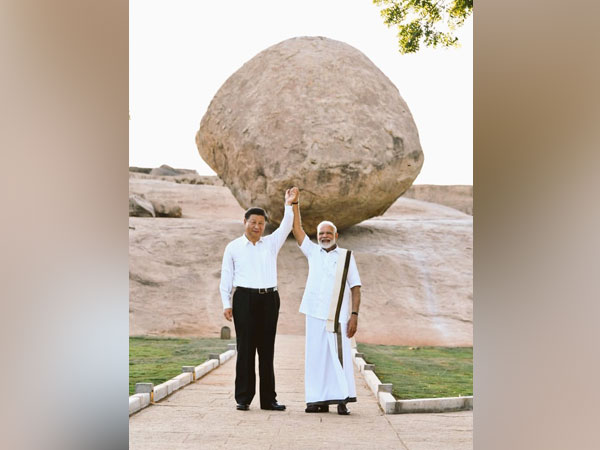 Mamallapuram (Tamil Nadu) [India], Oct 11 (ANI): The first day of the second informal summit between Prime Minister Narendra Modi and Chinese President Xi Jinping commenced in Mamallapuram on Friday with a splash of the country's rich heritage and cultural diversity on full display.

Both Modi and Xi had arrived in Chennai earlier in the day for the two-day meet. A red carpet was rolled out to welcome the Chinese President at the Chennai International Airport, while children in large numbers were seen holding panda soft toys as it is the national animal of China.
The airport was also decked with flowers, banana leaves and flags of both India and China in honour of Xi.
The Chinese President then proceeded to ITC Grand Chola Hotel in Guindy for a while.
Travelling around 55 kilometres to Mamallapuram from Chennai, Xi was received in the coastal city by a veshti-wearing Prime Minister Modi. While the Chinese President opted for a relaxed outfit comprising of a crisp white full-sleeved shirt and black trousers, Modi donned a veshti, angvastram and a white half-sleeved shirt for the first day of the informal summit.
Kick-starting the informal meet, Prime Minister Modi took the visiting Chinese dignitary on a tour of UNESCO World Heritage Sites like Arjuna's Penance, Krishna's Butter Ball and the Shore Temple in Mamallapuram, before settling down for a colourful performance.
The temple town is famed for its temples and architecture which date back to the Pallava Dynasty.
While touring the magnificent Panch Rathas complex, the two leaders sat down to catch their breaths and sipped on fresh coconut water, which was quite a departure from the 'Chai pe Charcha' that Modi is known for.
The two leaders enjoyed a thrilling cultural performance at Shore Temple's complex in the evening. The programme showcased the Indian classical dance forms of Kathakali and Bharatnatyam to fast-paced Carnatic music, highlighting the region's magnificent roots.
After the cultural performance, Modi hosted a special dinner for Xi. Sources said that the dinner began at around 7 pm and the two leaders conversated for more than two hours.
At the special dinner hosted by Modi in Xi's honour, the Chinese President relished the real taste of India. While a variety of Indian culinary delights were on display, a special focus was given to South India cuisine.
From Thakkali Rasam and Arachavitta Sambar to Kadalai Kuruma and Kavanarasi Halwa, the menu reflected the sweeping diversity of south Indian culinary traditions.
Modi gifted Xi a Nachiarkoil-Branched Annam Lamp and Thanjavur Painting-Dancing Saraswathi.
The Chinese President was earlier accorded a grand welcome by people who lined the streets along with traditional drum players, creating a warm environment which personified the Indian belief of 'Atithi Devo Bhava'.
The meeting is a follow up to the inaugural summit which was held in Wuhan from April 27 to 28 last year.
Taking forward the Wuhan Spirit, the Mamallapuram meet will provide an opportunity to the Chinese President and Prime Minister Modi to continue their discussions on overarching issues of bilateral, regional and global importance and to exchange views on deepening India-China Closer Development Partnership, the External Affairs Ministry had said in a statement ahead of two world leaders meet in the historic temple town.
While no Memorandum of Understanding (MoU) or agreements will be signed during the two-day engagement, Xi and Modi are slated to hold one-on-one and delegation-level talks on the second day of the informal meet.
The meeting between the two leaders will not have a specific agenda, however, the focus of the meeting will be on improving people-to-people contact and on how to maintain peace and tranquillity along the India-China border.
After the talks, Modi will host a lunch in honour for the visiting dignitary. Following this, Xi will then proceed to Chennai where he will depart for a two-day state visit to Nepal. (ANI)