Road accidents in India are like silent pandemic: Rajnath Singh 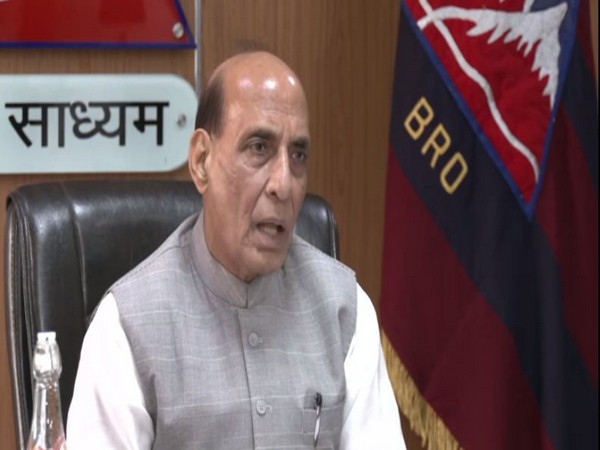 New Delhi [India], June 11 (ANI): Voicing his concerns over rising road accidents, Union Defence Minister Rajnath Singh on Friday said India accounts for nearly 11 per cent of the total road accidents in the world and it is no less than a silent pandemic.

Addressing the 'Karmayogis' of Border Road Organisation (BRO) via video conferencing, the Union Defence Minister said, "Accidents on the roads are a cause of great concern for us today. It is a matter of great surprise that our country has less than 3 per cent of the world's total vehicles, but accidents are close to 11 per cent. Every year around 4.5-5 lakh accidents and 1.5 lakh unfortunate deaths occur in the country. It is not less than a silent pandemic."
"To get rid of all this, whatever steps the government has taken, such as approving the 'National Road Safety Policy', bringing in the 'Motor Vehicle Act 2020', identifying black spots on national highways...these centres also have their own importance," he said.
BRO on Friday launched four new software for works management, road infrastructure digitisation, human resource management and recruitment management.
"The four software being launched today will bring efficiency to the work of the organization and will also save their time. Their creation also marks the success of 'Atmanirbhar Bharat' and 'Digital India' campaigns," stated Singh.
The Union Defence Minister said the start of two 'Centres of Excellence' based on the study of 'Road Safety', and roads, bridges, tunnels, air-fields is a matter of great pride for the country. He said these centres complement each other in their objectives.
"Right from its inception, BRO has been playing a vital role in the progress of the nation by building roads, tunnels and other infrastructure in remote areas. The most important component is connectivity. For connectivity, our BRO personnel have been working tirelessly even in the midst of difficulties like severe winter, heat, rain, snowfall. In the last 5-7 years, BRO has made even more remarkable achievements," he said.
He emphasised the increase in the budget of BRO by three to four times during the last five to seven years is not a trivial matter. Apart from this, 3,270 sets of special high altitude clothing are approved for our engineers and other personnel.
The Union Defence Minister further mentioned the slogans like "Sawdhani hati durghatna ghati" also helps making people aware while on road.
Singh further extended his best wishes to woman biker Kanchan for her solo expedition.
"I feel good knowing about Kanchan ji who is going to start solo women motorcycle expedition today. I was told that at an early age she started riding a motorcycle. So far she has covered 21,000 km in 10 years. I wish her all the best for this expedition," he said. (ANI)