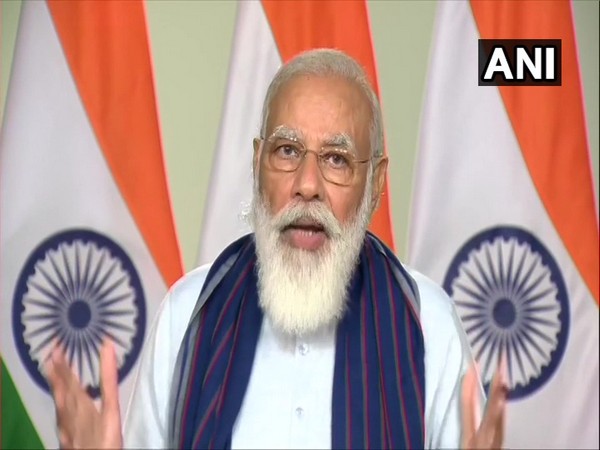 New Delhi [India], November 22 (ANI): Prime Minister Narendra Modi on Sunday said that rural water supply projects are making the lives of women easier and improving the health of poor families, which are giving a boost to the campaign for self-reliant villages and self-reliant India.

"The lives of our mothers and sisters are getting easier with water supply reaching their homes via taps under the Jan Jeevan Mission. A major benefit of this has also been on the health of poor families. It is also reducing many diseases caused by dirty water," Modi said after laying the foundation stone of rural drinking water supply projects in Mirzapur and Sonbhadra districts in Uttar Pradesh.
He said when water is supplied to thousands of villages of Vindhyanchal via pipes, it will also improve the health of children of this region, and help their physical and mental development.
In rural villages with no water supply, women and children are forced to travel long distances to gather drinking water.
"The government is working with people like a partner and a helper. The same thinking is being displayed in making 'pucca' houses for the poor families under the Pradhan Mantri Awas Yojana. What kind of house will be built in an area is not being decided in Delhi anymore," Modi said.
"In tribal villages, people live a certain lifestyle. Their houses cannot be made the same way as other places. They are given the freedom to choose what house they want. When you get the freedom to take decisions for the development of your village, work on those decisions, then it increases the confidence of everyone in the village," he added.
PM Modi also mentioned that it also gives a boost to the campaign for self-reliant villages and self-reliant India.
"Like other villages of the country, there was a huge power problem in this area as well. Today, this region is leading in the solar energy sector. Is an important centre of India. Mirzapur's solar power plant is writing a new chapter of its development," Modi said.
He said that 'Sabka Saath, Sabka Vikas, Sabka Vishwas' has become the mantra of trust for every citizen in every part of the country.
"Necessary facilities are also being prepared for setting up forest produce based industries in tribal areas under the self-reliant India campaign. The District Mineral Fund has been created to ensure there is no lack of funds for the development of tribal areas," he further said.
The Prime Minister was laying the foundation stone for projects to provide household tap water connections in all rural households of 2,995 villages and will benefit about 42 lakh population of Mirzapur and Sonbhadra districts.
Village Water and Sanitation Committees or Paani Samiti have been constituted in all these villages, who will shoulder the responsibility of operation and maintenance. The projects, estimated cost around Rs 5,555.38 crores, are planned to be completed in 24 months. (ANI)