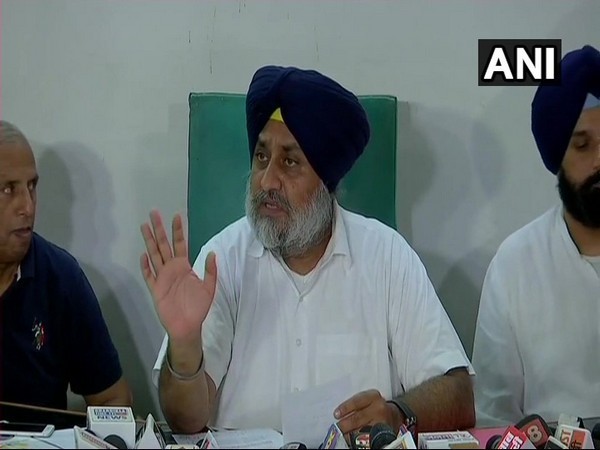 Chandigarh [India], September 15 (ANI): The Shiromani Akali Dal (SAD), a part of ruling National Democratic Alliance, has opposed the Essential Commodities (Amendment) Bill 2020, saying that as a party of the farmers, it cannot support anything "which goes against the interest of 'annadaata' in the country", a party release said.

The bill was later passed by Lok Sabha.
"SAD is essentially an organisation of farmers. Every Akali is a farmer and every farmer is an Akali at heart. The party has always championed the cause of the farmers and has made supreme sacrifices to safeguard their interests. That legacy cannot and will not be compromised or diluted, no matter what price we have to pay," SAD MP Sukhbir Singh Badal said in the Lok Sabha today, the release said.
He said the government erred grievously in not taking stakeholders - farmers and their organisations - on board.
Stating that the SAD was not consulted before the ordinances were framed, the release said the party has been asking the government not to press with the ordinance and not to bring this bill. "But our voice was not heeded to".
Badal said that when these Ordinances were being discussed in the cabinet, the party's representative and Union Minister Harsimrat Kaur Badal had raised objections and voiced the concerns of the farmers and requested that the ordinances be put off.
"But the Ordinances were still issued. We had hoped then that the government will correct the mistake when a Bill on these would be introduced. But that has not happened," the release said.
It said the SAD president effectively voiced the sentiments of all farmers saying that Punjab will be the worst affected by the effect of the ordinances and the Bill to convert these into an Act.
"Punjab and Haryana have built the best marketing infrastructure from their own resources. We will be the worst affected if the assured marketing of farmers' produce at MSP is endangered," he said. (ANI)