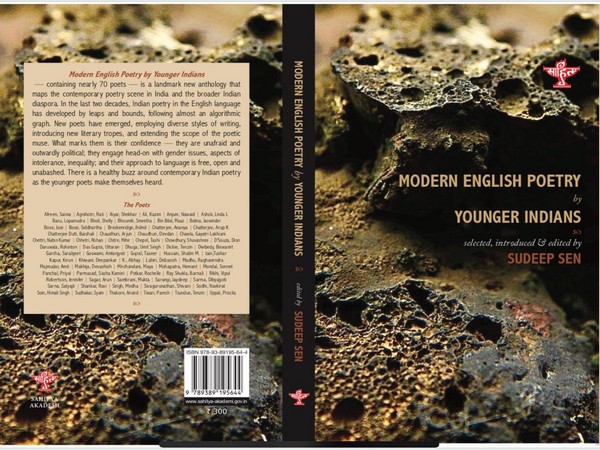 The anthology, selected, introduced and edited by noted poet Sudeep Sen, contains pieces by 70 poets who are in their 40s or less.
This book, in a sense, also acts as Volume 2 to The HarperCollins Book of English Poetry (2012) which Sen had earlier edited. Paired together, these two anthologies comprehensively map the last 70 years of Indian English Poetry with a substantial representation of 150 of the best poets writing today.
Speaking about the anthology, Indian poet-diplomat Abhay K said: "It is a very important anthology for two reasons--first that it has been published by the Sahitya Akademi, which will make it available in different parts of India and broaden the reach of Indian English poetry, second that it comes at a time when 2020, the year marking the second centenary of Indian English poetry is just two months away".
Indian poetry in English has a literary tradition, approximately 200 years old, as poets started writing poems in English as early as 1820.
"Nearly a hundred years have passed since E V Rieu's India in Song: Eastern Themes in English Verse by British and Indian Poets (Oxford University Press, 1920), one of the earliest known attempts to present Indian poetry in English in serious anthology form," an official statement said.
In the last two decades, Indian poetry in the English language has developed by leaps and bounds. New poets have emerged, employing diverse styles of writing, introducing new literary tropes, and extending the scope of the poetic muse.
"What marks them is their confidence -- they are unafraid and outwardly political; they engage head-on with gender issues, aspects of intolerance, inequality and divergent sexualities; and their approach to language is free, open and unabashed," it said. (ANI)