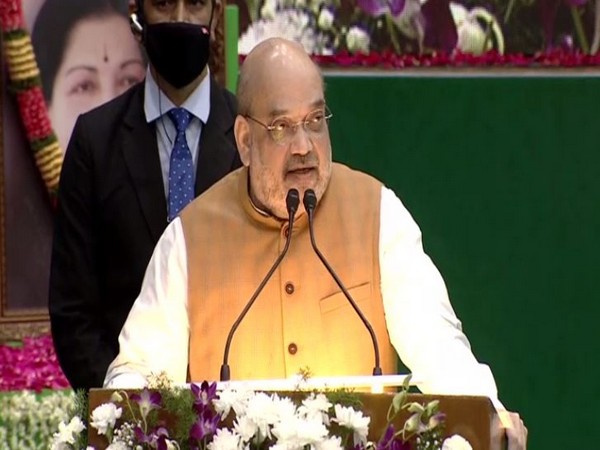 Chennai (Tamil Nadu) [India], November 21 (ANI): Union Home Minister Amit Shah on Saturday said that the schemes and funds provided to Tamil Nadu by the Central Government are not meant for help but it is the right of Tamil Nadu that were not being given to it earlier.

"With all humility, we state that the schemes and funds provided to Tamil Nadu by the Central government are not meant for help but it is the right of Tamil Nadu that were not being given to it but Modi ji ensured that now Tamil Nadu gets its rights," said Shah after inaugurating and laying the foundation stone of various development projects in Chennai.
"Sometimes I heard DMK leaders speaking of injustice done to Tamil Nadu. DMK and Congress were at the Centre for 10 years. We are ready for a debate on whether Tamil Nadu got more help in those 10 years or during the tenure of our government," he added.
Meanwhile, overwhelmed with the visit of Amit Shah, Tamil Nadu Deputy Chief Minister and AIADMK coordinator O Panneerselvam said that his party will continue its alliance with the BJP for state polls.
"We will continue our alliance with BJP," he said.
The Union Home Minister laid the foundation stone for phase-two of the Chennai Metro Rail Project built at a cost of Rs 61,843 crore and virtually dedicated the new reservoir at Thervaikandigai (Rs 380 crore) to the people in Chennai.
Union Home Minister reminded the people of the state that Prime Minister Narendra Modi visited Tamil families when he visited Jaffna.
"When Modi ji visited Sri Lanka, he didn't forget Jaffna. He visited Tamil colonies there & met with Tamil brothers & sisters. He laid foundation stone for providing them houses. Over 50,000 Tamils will get houses & damaged temples will be rejuvenated in Sri Lanka," Shah said.
"After Modi Ji came into power, competitiveness among states has increased. I am happy that Tamil Nadu has secured first place among the states in good governance this year. Modi government has announced to establish defence industrial corridor projects in only two states of the country and Tamil Nadu is one of them," said Shah.
"Tamil Nadu and Tamil recommendation are one of the oldest recommendations in history. I am confident that the way Tamil Nadu developed under the leadership of MGR and Jayalalitha, it will develop in a similar way under Palaniswami's leadership," he added.
PM Modi's leadership gave a new dimension to the fight against COVID-19, the Union Home Minister stated.
"Either different projects worth Rs 70,000 crore have been launched today or their Bhumi Pujan has been conducted. Currently, the entire nation and world are fighting against COVID-19. The entire country has successfully faced this epidemic under the leadership of Modi Ji. If you look at the data, then India has been able to face COVID-19 in a very good way even as compared to the developed countries all over the world," said Shah.
"Tamil Nadu is one of the states where governments have fought in their best ways against COVID-19 and for that I would like to congratulate Tamil Nadu Chief Minister and Deputy Chief Minister," he added.
Tamil Nadu Chief Minister Edappadi Palaniswami and his deputy O Panneerselvam were present at the occasion. The Union minister also paid his tribute to former chief ministers Maruthur Gopalan Ramachandran (popularly known as M.G.R.) and Jayalalitha at the event today.
The Home Minister is in Chennai lay the foundation for various infrastructure projects worth a whopping Rs 67,378 crore along with the launch of an elevated corridor on Coimbatore-Avinashi Road (Rs 1,620 crore), construction of a new barrage across the Cauvery at Nanjai Pugalur in Karur district (Rs 406 crore), Chennai Trade Centre extension project (Rs 309 crore), Indian Oil Corporation Terminal at Vallur in Tiruvallur district (Rs 900 crore), Lube plant at Amullaivoyal (Rs 1,400 crore) and a new berth at Kamarajar port in Chennai (Rs 900 crore) to boost cargo handling, as per an official statement.
Shah's visit assumes significance as BJP prepares itself for the Assembly polls scheduled in mid-2021 in Tamil Nadu. (ANI)