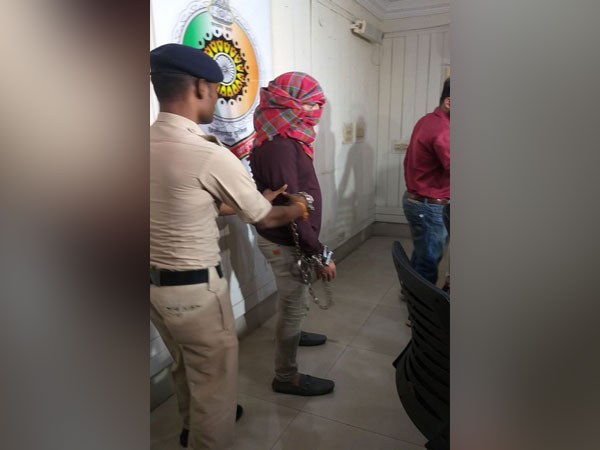 Raipur (Chhatisgarh) [India], Oct 12 (ANI): A suspected Students' Islamic Movement of India (SIMI) terrorist Azharuddin, also known as 'Chemical Ali' who was allegedly involved in the 2013 Bodhgaya and Patna bomb blasts was on Friday nabbed by Chhattisgarh police from Hyderabad airport after he landed from Saudi Arabia, a senior police officer said Saturday.

"Azharuddin, a resident of Moudhapara in Raipur named in connection with the blasts, had been absconding for the past six years and was hiding in Saudi Arabia where he was working as a driver and a salesman at a supermarket," Senior Superintendent of Police Arif Sheikh told reporters at a press conference here.
A joint team of Chattisgarh Police along with Anti-Terrorism Squad squad made the arrests based on specific input about Azharuddin's arrival at the airport here.
The team under the direction of Deputy Inspector General of Police and Senior Superintendent of Police, Arif H. Shaikh, under the leadership of Municipal Superintendent of Police, Civil Line Trilok Bansal (IPS) Raipur Police and ATS special team made the arrest and brought him to Raipur.
The SIMI operative, is said to be part of a sleeper cell and had allegedly given shelter to the accused in the Bodhgaya and Patna bomb blasts, will be produced in the court today and the probe agencies will seek a two-day police remand.
One passport, two driving licenses, a voting pass and a voter identity card has been seized from the possession of the accused, the police officer said.
A Tibetan monk and a tourist were injured in the 2013 blast that took place when a large number of devotees had gathered near the sacred Bodhi tree for morning prayers. As many as nine blasts took place within a span of 30 minutes which rocked the sacred city of Bodh Gaya, marking the first terrorist attack on the soil of Bihar.
Not only that, but the terrorists had also planted a cylinder bomb under the Bodhi tree as well which fortunately did not explode.
In October 2013, Patna there were crude bomb explosions before Narendra Modi arrived to address thousands of supporters and launch his party's campaign for the national election.
A total of 17 were arrested in connection with the Bodhgaya and Patna blasts and Azharuddin had been absconding, police said. (ANI)