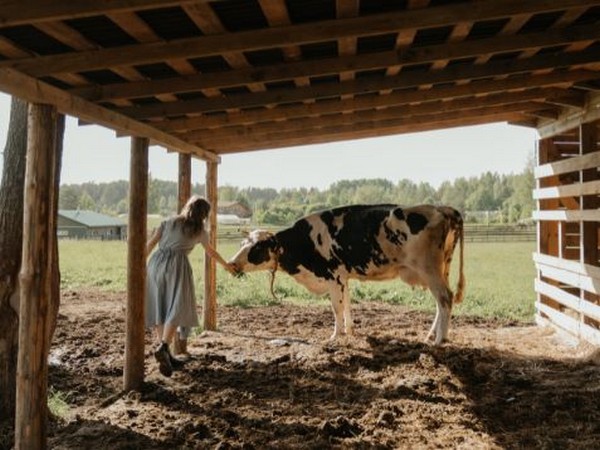 Brasilia [Brazil], May 8 (ANI): Brazilian researchers show that the inclusion of soybean and linseed oils in the diet of dairy cows made the fatty acid content of their milk even healthier for human nutrition. It also increased the proportions of omega-6 and omega-3, which in the right balance play a key role in preventing cardiovascular diseases.

Cardiovascular diseases are one of the world's main public health problems. In Brazil, they are among the foremost causes of death. Each year some 300,000 Brazilians have heart attacks, dying in 30 per cent of cases, according to the Health Ministry.
Research led by Arlindo Saran Netto, a professor at the University of Sao Paulo's School of Animal Science and Food Engineering (FZEA-USP) in Pirassununga, Sao Paulo state, shows that consumption of these oils by dairy cows reduced the level of saturated fatty acids in their milk and increased the level of unsaturated fatty acids, which help reduce LDL, known as "bad cholesterol".
An article published in the journal PLOS ONE, reports the results of the research, which was supported by FAPESP (FUNDACAO DE AMPARO A PESQUISA DO ESTADO DE SAO PAULO research foundation). The study was one of a series led by Saran Netto for more than five years with the aim of improving food quality and developing novel types of milk and meat.
"The quality of the milk available on the market is good. In our research, we aim to create more opportunities to make sure milk benefits human health in novel ways. Many consumers want to go on a specific diet," Saran Netto told Agencia FAPESP.
The study showed that supplementing the cows' feed with these two oils resulted in an omega-6/omega-3 ratio of 2.7:1 in their milk. Given the opposing effects of the two fatty acids, a healthy diet should be properly balanced.
The World Health Organization (WHO) recommends between 5:1 and 10:1, but 50:1 could result from a diet consisting mostly of ultra-processed food with little fish and vegetables, causing an imbalance and heightening the risk of heart disease and cancer.
Like other mammals, humans cannot synthesize omega-6 or omega-3 and must obtain them from food. "Future studies should evaluate the health benefits of omega-enriched milk in the human diet," the article concludes.
In human metabolism, omega-6 and omega-3 compete for the same elongase and desaturase enzymes. Higher levels of omega-6 impair the metabolization of omega-3. Too much omega-6 can raise blood pressure and triglyceride levels, among other problems. Omega-3 can exert anti-inflammatory action and reduce blood lipids. Recent research has shown that diets with the right amounts of both play an important role in disease prevention.
The researchers worked with 18 lactating Holstein dairy cows for 94 days. All animals were fed the same diet for the first ten days, followed by three experimental periods of 28 days. Control was a regular dairy cow diet with no addition of oil. Then soybean oil was added at 2.5 per cent as a source of omega-6, followed by 2.5 per cent linseed oil as a source of omega-3. Both oils corresponded to 2.5 per cent of total dry matter, replacing corn.
These levels were chosen because in previous studies by the group they enhanced the fatty acid profile of the milk without significantly altering yield. Milk samples were then analyzed for fat, protein, lactose, and total solids.
Research by Saran Netto's group published in 2016 showed that the addition of canola oil to the diet of dairy cows also altered the fatty acid profile of their milk, making it healthier.
Another study, also funded by FAPESP, experimented with supplementation comprising sunflower oil, organic selenium and vitamin E, improving animal health and both milk yield and conservation while showing that children who consumed the milk had increased levels of selenium and vitamin E in their blood.
Cow's milk has historically been an important source of nutrients for human consumption. It is rich in proteins, calcium, magnesium, selenium and vitamin B12, among others.
In recent decades, however, demand has fallen, especially in the United States and Canada, for several reasons including health and dietary concerns. For example, the fat in milk can cause allergic reactions and normally contains saturated fatty acids associated with weight gain and obesity. A great deal of scientific research has therefore been devoted to the adaptations needed to meet consumer demand for a healthier product.
Brazil ranks fifth among the world's leading milk producers, with an annual output of 34 billion litres. Dairy is one of the most important segments of its food industry. Annual consumption of milk averages 170 litres per capita, less than the developed-country average (250-300 litres). UHT (long life) milk is the most consumed milk product, but sales of cheese have risen strongly in recent years.
The types of milk obtained by Saran Netto and his group are not yet on sale in Brazil, although the research is more than complete. The main reason, he said, is logistical difficulties with distribution and industrial processing that have delayed commercialization.
"In many cases, the same truck collects milk from several farms. This hinders the development of the product because we can't mix regular milk and milk produced by cows with a specific diet. Likewise in the industry: we need a separate production line for special milk," he said.
"Consumer demand isn't large enough yet to guarantee sales volumes that would make separate processing viable." In future, he hopes to try to commercialize milk with supplemental omega-3 and antioxidants. (ANI)