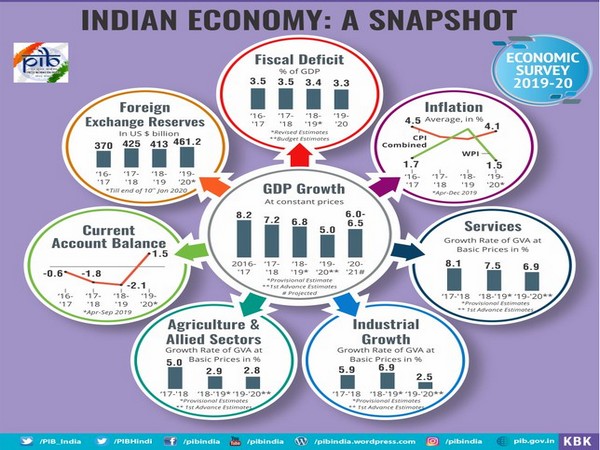 New Delhi [India], Jan 31 (ANI): The Economic Survey 2020 says that growth in exports provides a much-needed pathway for job creation in India and integration of `Assemble in India for the World' into 'Make In India' can raise India's export market share to about 3.5 per cent by 2025 and 6 per cent by 2030.

It says specialisation and quantity expansion can help India become a major exporter.
The surveys says that growth in exports provides a much-needed pathway for job creation in India.
"In just five-year period 2001-2006, labour-intensive exports enabled China to create 70 million jobs for workers with primary education. In India, increased exports explain the conversion of about 8,00,000 jobs from informal to formal between 1999 and 2011, representing 0.8 per cent of the labour force," the pre-budget survey says.
The survey suggests that India must focus on a group of industries, referred to as "network products", where production processes are globally fragmented and controlled by leading Multi-National Enterprises (MNEs) within their "producer driven" global production networks.
According to Finance Ministry release, the survey notes that China's remarkable export performance vis-a-vis India is driven primarily by deliberate specialization at large scale in labour-intensive activities, especially "network product"where production occurs across Global Value Chains (GVCs) operated by multi-national corporations.
"By integrating "Assemble in India for the world" into Make in India, India can raise its export market share to about 3.5 per cent by 2025 and 6 per cent by 2030, which is highly feasible. In the process, India would create about 4 crore well-paid jobs by 2025 and about 8 crore by 2030," the release said.
The pre-budget survey says that the incremental value added in the economy from the target level of exports of network products, which is expected to equal $248 billion in 2025, would make up about one-quarter of the increase required for making India a $5 trillion economy by 2025.
The Survey finds that China-India gap in world market share is almost fully driven by the effect of specialization.
It says India is clearly catching up with China in terms of diversification across products and markets. However, high diversification combined with low specialization implies that "India is spreading its exports thinly over many products and partners, leading to its lacklustre performance compared to China", the Survey says.
According to the Survey, the specialization effect can change over the years, due to changes in the quantity and/or the prices of exported commodities. The survey suggests, if India wants to become a major exporter, it should specialize more in the areas of its comparative advantage and achieve significant quantity expansion.
It says China's export composition shows a strong bias towards traditional labour-intensive industries and labour-intensive stage of production processes within capital-intensive industries (in particular, assembly of electronics and electrical machinery). "Dominance of capital intensive products in the export basket along with a low level of participation in GVCs have resulted in a disproportionate shift in India's geographical direction of exports from traditional rich country markets to other destinations," the survey says.
It notes that driven by the nature of its specialization, India has gained a competitive advantage in relatively low and middle-income country markets, but at the cost of losing the much bigger markets in richer countries.
The Survey suggests that given India's comparative advantage in labour-intensive activities and the imperative of creating employment for a growing labour force, there are two groups of industries that hold the greatest potential for export growth and job creation.
It says there exists a significant unexploited export potential in India's traditional unskilled labour-intensive industries such as textiles, clothing footwear and toys and India has huge potential to emerge as a major hub for final assembly in a range of products, referred to as 'network products'. (ANI)