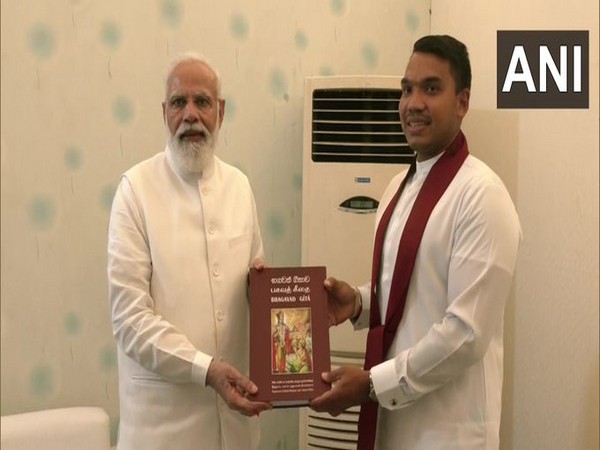 Following the inauguration ceremony, Sri Lanka's Cabinet Minister gifted a Sinhala version of the Bhagavad Gita to PM Modi, which also carried a message from Sri Lankan Prime Minister Mahinda Rajapaksa.
Speaking at an event organised to mark Abhidhamma Day, Rajapaksa thanked Prime Minister Modi for extending a grant of USD 15 million to Sri Lanka to strengthen the Buddhist ties between the two nations.
Rajapaksa said, "It gives me great pleasure and honour to be on the inaugural international flight to Kushinagar on the auspicious day of Vap Poya Day. I recall it was Indian PM Modi who suggested to the Sri Lankan Prime Minister during the Virtual Bilateral Summit with Sri Lanka in September 2020, that 100 members of Buddhist clergy must join for the inaugural flight to Kushinagar operated by Sri Lankan airlines. It's an honour we will cherish for years to come."
Rajapaksa said that Buddhism is the greatest gift India had given to Sri Lanka. "Ever since it (Buddhism) arrived in Sri Lanka, the relationship between our countries have been growing," he said.
He further noted that Sri Lankan PM Mahinda Rajapaksa commissioned the translation of Bhagavad Gita in all languages spoken in Sri Lanka.
Earlier, Sports Minister Rajapaksa lauded the gesture of Prime Minister Narendra Modi of inviting and making the Sri Lankan airlines to be the first to land at the airport.
"It is a great gesture by Prime Minister Narendra Modi to open an international airport at Kushinagar, especially inviting Sri Lankan airlines as the first international carrier to land at the airport. We believe there are numerous travellers who travel to India for Buddhist pilgrimage, and opening an airport at such a holy place for the Buddhists will not only benefit the Buddhists of Sri Lanka but also Buddhist pilgrims from all over the world," Rajapaksa said while talking to ANI.
The Ambassador of Bhutan, Maj Gen Vetsop Namgyel told ANI that the inauguration of the airport will make the Buddhist circuit tourism very convenient.
"Wonderful development, as it will give the opportunity to Buddhist countries to come very conveniently to the most sacred place where Lord Buddha entered into Paranirvana. It will make the Buddhist circuit tourism very convenient," he said.
Hoping that the inauguration of the airport would attract a lot of tourists from Thailand, the Ambassador of Thailand, Pattarat Hongtong said that the airport would facilitate and boost their visit to the country.
"We have a lot of Thailand people who come here for pilgrimage. So having the new international airport would facilitate and boost the visit of the Thai people. I am sure we will have a lot of tourists coming in from Thailand. The Thai people like to come to India to complete the Buddhist circuit, so having an international flight would make the trip much easier," she told ANI.
Speaking to ANI, the Ambassador of Vietnam, Pham Sanh Chau expressed his bliss on the inauguration of the airport and said that the biggest amount of visitors coming to India are for the Buddhist pilgrimage.
"The biggest amount of visitors coming from Vietnam to India are the Buddhist and for the Buddhist pilgrimage. So we are very happy to see this airport become an international airport. This would reduce the travel distance very much. I and my family have been here too, and I believe that we have to boost more tourism coming from Vietnam," he said.
Ambassador of Myanmar Moe Kyaw Aung said that the move will attract more tourists from Myanmar as the majority of the population are Buddhists.
"This is a very important Buddhist circuit site. Previously they had to come from Gorakhpur, but now they can come directly to Kushinagar," he said while talking to ANI.
Minister Counsellor of Nepal Ananda Prasad Sharma hoped that the airport will facilitate the Buddhist devotees coming for pilgrimage. (ANI)