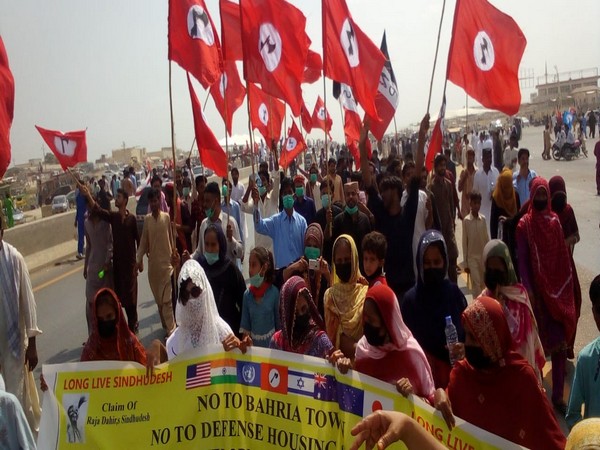 They were protesting against the "illegal acts" of BTK for dismantling old villages to occupy Sindh lands. On Sunday, the right group JSQM had organised the protest, reported Dawn.
The protest against BTK against land grabbing turned violent on Sunday as fast-food franchises, several vehicles, a showroom and two offices of estate agents were set ablaze and police resorted to teargas shelling and firing rubber bullets.

JSQM Chairman Sanan Khan Qureshi and many of his party colleagues a day earlier were arrested on the charges of violent attacks, subversion and arson by Imran Khan's government.

Imran Khan-led government in the name of development has been grabbing the lands of Sindh. Through Defense Housing Authority (DHA), Islands mega projects, Coastal Belt projects, Pakistan Army Cantonment Development and other Bahria mega projects, the Punjabi establishment is in action on the agenda to merge Sindh in the greater Punjab plan.

Under a conspiracy from Karachi to Kashmor, Bahria Town, DHA City and other mega projects have been initiated on converting the Sindhi people to a minority in the name of Pakistan.

In Karachi, markets, bazaars and shops were closed in Gulshan-i-Hadeed and several localities of Malir. Qureshi was said to have been picked up by police from his Gulshan-i-Hadeed residence after he and many other leaders, activists and workers were booked over violent attacks, subversion and arson that took place during protest against Bahria Town Karachi, reported Dawn.

The strike call remained effective in Larkana city as trading at main trade centres was suspended till 3 pm, reported Dawn.The protesters raised slogans against the arrest of JSQM chairman as well as leaders and workers of other nationalist parties and groups.
They deplored that at the behest of the BTK administration, police booked many protesters under terrorism charges and arrested scores of them.The leaders said the police action had sent a wave of resentment among the people of Sindh. "We still don't know about Sanan Qureshi's whereabouts," they said, and called for his immediate release along with all those picked up by police. They demanded withdrawal of all cases registered against them, reported Dawn.
JSQM activists took out protest rally in Jacobabad against their party chief's arrest. They said they feared for Qureshi's life because JSQM's founding chairman Bashir Khan Qureshi was also "killed under a conspiracy", reported Dawn.
In Tangwani town of Kandhkot-Kashmore district, a shutter-down strike was observed on the party's call.
A rally was also taken out from Masha Allah bus stop to Rahbar Chowk. Local leaders and activists of the Sindh Taraqqi-pasand Party (STP) also joined the rally.
Strike was also observed in Kandhkot town where Sarrafa Bazaar, Shahi Bazaar and other markets as well as shops and other commercial outlets in the Clock Tower area and Shikarpur Road remained closed, reported Dawn.
Activists of several nationalist parties took out a rally and staged a demonstration in front of the press club in Dadu.
Similar rallies were held in Johi, Mehar, Khairpur Nathan Shah, Sehwan, Bhan Syedabad, Sann, Manjhand, Kotri and Jamshoro, reported Dawn. (ANI)