Swachhagraha has empowered India in fight against COVID-19: PM Modi 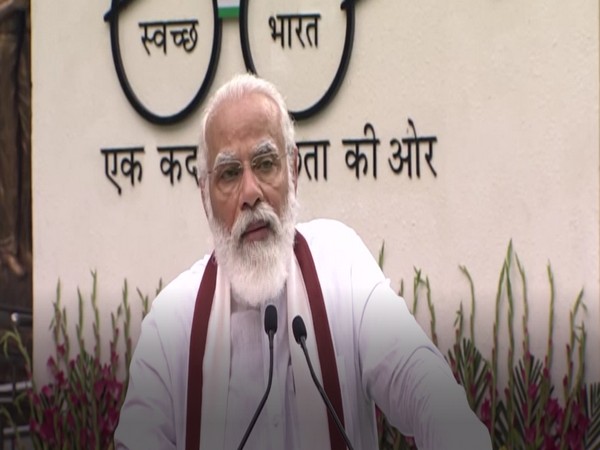 New Delhi [India], Aug 8 (ANI): Noting that 60 crore people have been provided toilet facilities in 60 months, Prime Minister Narendra Modi on Saturday said `swachhagraha' has empowered the country in its fight against COVID-19 and asked if lockdown to contain coronavirus would have been possible if a large section of the population was defecating in the open.

Inaugurating Rashtriya Swachhata Kendra (RSK) here, the Prime Minister also referred to the anniversary of Quit India movement and launched 'Gandagi Mukt Bharat', a special week-long campaign for swachhata (cleanliness) in the run up to Independence Day, during which each day till August 15 there will be special swachhata initiatives in urban and rural areas of the country.
He said India has to move from ODF (open defecation free) status to "ODF plus" and devise ways of turning dirt into gold.
"Imagine what would have happened had pandemic like coronavirus broken out before 2014. Could we have imposed lockdown when over 60 per cent population was forced for open defecation? Swachhagraha has empowered us in the fight against COVID-19. This is a journey that will continuously go on. We have to move to ODF+ from ODF now. We have to devise ways of converting dirt into gold," he said.
The Rashtriya Swachhata Kendra is an interactive experience centre on the Swachh Bharat Mission at the Gandhi Smriti and Darshan Samiti at Rajghat in the national capital. It is a tribute to Mahatma Gandhi and was announced by the Prime Minister in April 2017 on the occasion of the centenary celebrations of Gandhiji's Champaran Satyagraha.
After taking a tour of RSK, the Prime Minister briefly visited the RSK souvenir centre. He interacted with 36 school students from Delhi, representing all states and union territories at the amphitheatre of the RSK, adhering to social distancing protocols.
In his address, the Prime Minister said that in the last few years lakhs of people across the country, who are inspired by Mahatma Gandhi, have made 'Swachh Bharat Mission' a goal of their lives.
"This is the reason that we have been able to provide toilet facility to over 60 crore people in just 60 months. Due to this people got self-confidence and women got respect and security. Poor children were saved from deadly diseases. Dalits, tribals and oppressed classes benefitted due to toilets. Due to Swachha Bharat Abhiyan, our country's culture has witnessed a transformation," he added.
Recalling anniversary of Quit India movement, the Prime Minister said Mahatma Gandhi had driven Britishers away from India.
"Our aim is to drive `gandagi' away from India. We all are a part of a campaign now, 'Gandagi, Bharat chorho'. On this historic occasion, the inauguration of Rashtriya Swachhata Kendra holds significance. Mahatma Gandhi used to see Swaraj (independence) in cleanliness. I am happy that a modern memorial has been established near Raj Ghat which will honour the idea of cleanliness as an ideal," he said.
The Prime Minister said that touring the Rashtriya Swachhata Kendra, he was reminded of the efforts that went in the Swachh Bharat Mission launched in 2014.
"In this Kendra, the journey of swachhagraha has been inspired by Mahatma Gandhi's idea of satyagraha. There cannot be a greater inspiration for the world than Gandhiji. Gandhiji's 150th birth anniversary was observed last year. Gandhiji's favourite song 'Vaishnav Jan to tene kahiye' has been sung around the world in different languages. Gandhiji strove for independence from a powerful government through simple means," he said.
Modi said Gandhi championed cleanliness as a movement.
"He used to say that swaraj (self-rule) could be brought by confident and swachh (clean) people. He knew that swachhata and swaraj were interconnected. He knew 'gandagi' causes immense troubles to poor people. Gandhiji knew freedom from foreign rule will not be possible till people lived in `gandagi'. He used cleanliness as a medium in his satyagraha from South Africa to Champaran," he said.
Referring to 'Gandagi Mukt Bharat' campaign, he said efforts should be made not only to rid the society of dirt but all the ills.
During his interaction with children, he appreciated the role of technology in aiding people in maintaining cleanliness. He also hailed northeast India for its commitment to cleanliness and said that the whole country can learn from it.
He said children had played a significant role in the Swachh Bharat Mission. (ANI)