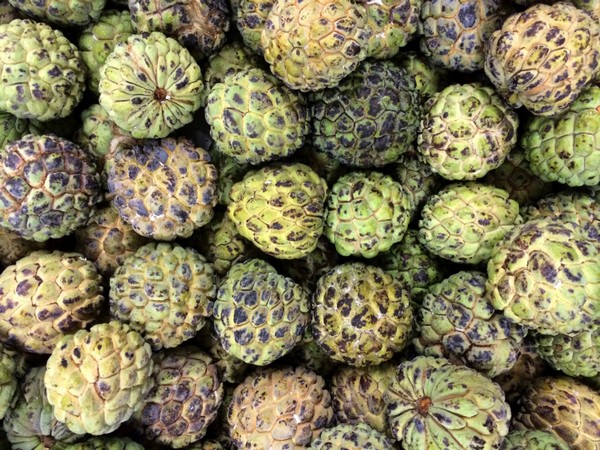 According to a notice issued by the Department of Animal and Plant Quarantine under China's General Administration of Customs on Saturday, the decision to suspend imports of the Taiwanese fruits came after Planococcus minor, a type of mealybug, was found in several shipments this year, Focus Taiwan reported.
To protect the fruit growers, the COA will adopt measures it had first used following China's ban on the imports of Taiwan pineapples earlier this year, including offering financial subsidies to affected farmers.
The COA will this time earmark NT$1 billion (US$35.96 million) to help promote the domestic sales of wax and custard apples and expand their sales to other overseas markets, Chen said.
China on Sunday announced that it will suspend sugar apples and Java apples from Taiwan from Monday, claiming that multiple inspections detected quarantine pests in the two subtropical fruits this year.
According to a notice published on the website of China's General Administration of Customs (GAC) on Sunday, customs authorities will suspend declarations for cherimoya and wax apple originating from Taiwan, citing Planococcus minor found on multiple occasions this year, Chinese state media Global Times reported.
Its comes days after US media reported that US officials were considering changing the name of the Taiwan mission in Washington to "Taiwan Representative Office".
However, the Chinese state media tried to delink the two issues saying it is actually a normal biosafety precaution measure.

Planococcus minor is a pest of more than 250 host plants, and can harm tropical and subtropical fruits as well as crops. Once introduced and colonized, the pest could create serious economic damage across the fruit industry.
The new actions by the Chinese government come as Beijing is ramping up diplomatic and military pressure on Taiwan.
Beijing claims full sovereignty over Taiwan, a democracy of almost 24 million people located off the southeastern coast of mainland China, despite the fact that the two sides have been governed separately for more than seven decades.
Taipei, on the other hand, has countered the Chinese aggression by increasing strategic ties with democracies including the US, which has been repeatedly opposed by Beijing. China has threatened that "Taiwan's independence" means war.
On June 1, Chinese President Xi Jinping pledged to complete reunification with self-ruled Taiwan and vowed to smash any attempts at formal independence for the island. (ANI)