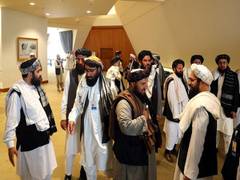 New Delhi [India], May 23 (ANI): Taliban have recently clarified that they do not support the 'holy war' against India and that Kashmir is India's internal matter.

The clarification came after some fake tweets were attributed to Taliban spokespersons Suhail Shaheen and Zabiullah Mujahid.
Security experts here in New Delhi see Taliban's recent position on non-interference in internal matters of other countries as a tactical statement ahead of Intra-Afghan dialogue
Member of National Security Advisory Board Tilak Deveshwar, while speaking to ANI, said: "In my personal view, they are playing good cop, bad cop. Taliban want to cut the support base of the Ghani government ahead of the Intra-Afghanistan dialogue and want to demoralise Ghani government by opening some sort of dialogue with India which has kept a distance from any talks with Taliban."
So far, India has stayed away from dialogue with the Taliban. US Special envoy Zalmay Khalilzad also recently urged India to open direct talks with the Taliban.
"No surprise, if the Taliban want to engage with India. This kind of overture is logical. They would like to assuage India's concern over Kashmir, which in turn brings Pakistan into the picture," said Uday Bhaskar, Director, Society of Policy Studies.
"It appears that one group within Taliban, more moderate, malleable is seeking to create a kind of tentative political space to encourage Delhi to engage with a group that I am afraid is synonymous with terrorism," added Bhaskar.
"Moot point is the way the Taliban played a double game with the international community, it's playing same with India. They are trying to manufacture a narrative that they are a reasonable face which is Afghan-based and will not interfere in the internal affair of any country. However, to believe that the Taliban have severed all ties with Al Qaeda and ISIS will be delusional," said Sushant Sareen, Senior Fellow at ORF.
When asked whether India should believe in the Taliban, he said: "Too early to such a leap of faith. In my view, this is a group that over the last 25 years have been guilty of premeditated murderous attacks on schools, children, hospitals and women, the Afghan people basically. So believing the Taliban may be possible only when they desist from behaving like a group of terrorists, committed to shedding the blood of innocents."
"If the Taliban have changed, they must give a demonstrative action," added Deveshwar.
"Taliban are throwing an olive branch to India but how serious they are? Talking to the Taliban means talking to ISI. They are proxies of Pakistan. When you start talking to the Taliban, you alienate your friend, that is, Ghani government," said Sareen. (ANI)