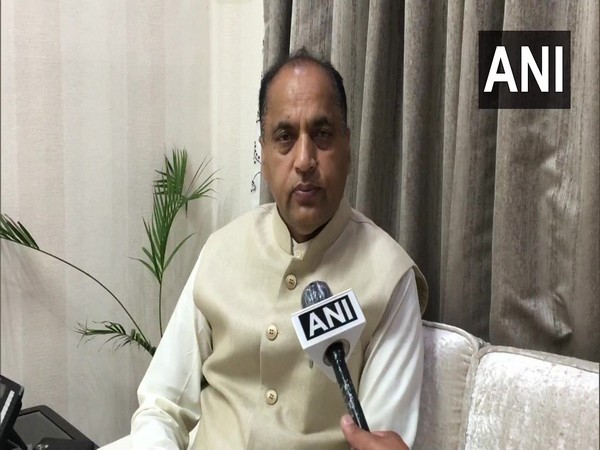 New Delhi [India], September 14 (ANI): After his arrival in Delhi, Himachal Chief Minister Jairam Thakur on Tuesday dismissed speculation about a change of leadership in the state and said that his visit to Delhi was a scheduled organisational meeting.

Thakur, who has come to the national capital twice in a month, said talk about leadership change was baseless. Thakur told ANI, "The talks are baseless. This is a scheduled program. It is a meeting of the organisation and I have come to participate in that meeting. This date was fixed 20 days ago and was a matter of routine. I have gone to meet the party's national president and senior leaders."
When asked about the meeting with Amit Shah, Thakur said, "There are chances of meeting Amit Shah Ji but the time is not yet fixed."
This comes after, Himachal leader of the Opposition Mukesh Agnihotri said he has read on social media that not five, but six chief ministers are to be changed, so Jai Ram Thakur should save his chair.
Reacting to the remark of Congress's Vikramaditya Singh that BJP is preparing to remove the Himachal Chief Minister, Thakur said, "Vikramaditya Singh is in a hurry. Now the family is going through a period of mourning. What should be said from the political point of view? He should have some patience. My party will take decisions."
Although Thakur has denied the possibility of change in leadership, his visit also fuelled speculation that there may be an impending change in the state as Thakur had visited the national capital on September 8 as well.
It is also learnt that a discussion on Assembly polls scheduled for next year is expected to take place at the meeting.
Recently, Gujarat witnessed a leadership reshuffle, as Vijay Rupani resigned from his position and first-time MLA from Ghatlodia constituency, Patel will take oath as the 17th chief minister of Gujarat with Assembly polls in the state scheduled to take place in 2022
Rupani is the fourth Chief Minister to put in his papers this year. Earlier, Karnataka CM BS Yediyurappa had resigned and two chief ministers in Uttarakhand--Tirath Singh Rawat and Trivendra Rawat--had also stepped down. (ANI)