Tamils are not opposed to Hindi: Shiv Sena 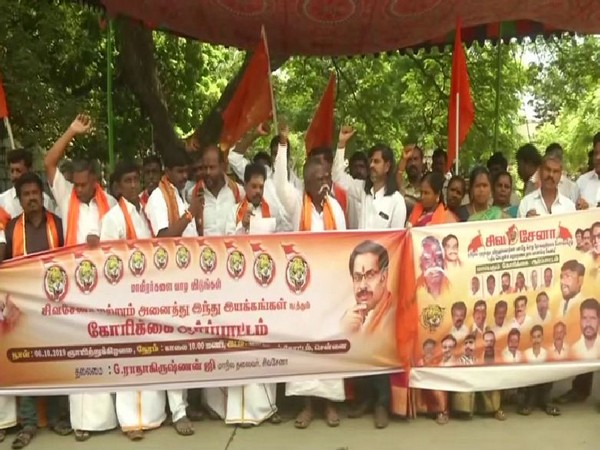 Chennai (Tamil Nadu): Tamil people are not opposed to Hindi and students in schools and colleges should have the option to study Hindi, said Shiv Sena's state unit chief Radhakrishnan on Sunday.

"There is a strong opinion that Tamil people are opposed to Hindi, which is wrong. There will be an agitation to support Hindi in the state. Students in schools and colleges should have the option to study Hindi," Radhakrishnan told the news agency ANI.

The state unit of Shiv Sena on Sunday organised a demonstration today where apart from clearing their stand on the issue of Hindi, they made some other demands as well.

"So many Hindutva activists have been arrested in Tamil Nadu and they are in jails. They should be released immediately," demanded the Shiv Sena leader.

"Temple properties and rich ornaments of Hindu temples were looted in which so many politicians are involved. Temple lands to the extent of 5 lakh acre were encroached upon by politicians and others. All these properties should be recovered and utilised for the welfare of poor Hindus of the state," added Radhakrishnan.