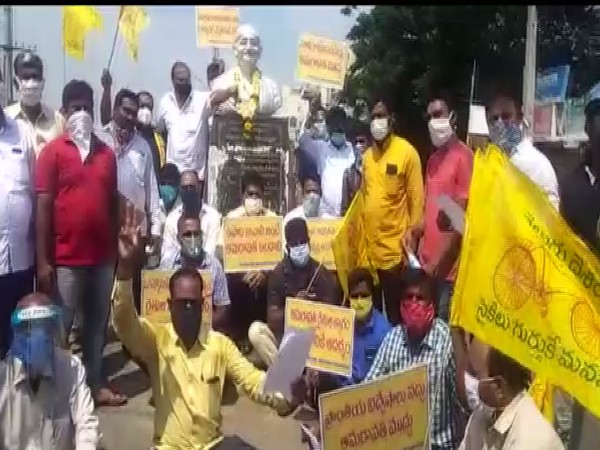 Several TDP leaders including, Kuna Ravi Kumar and party cadre staged the protest at the Gandhi statue.
They condemned the assent given by Governor Harichandan for Andhra Pradesh Decentralisation and Inclusive Development of All Regions Act 2020 and the Capital Region Development Authority (Repeal) Act, 2020.
TDP leaders raised slogans against the YSR Congress Party government.
TDP spokesperson K Pattabhiram on Saturday alleged that the move is "unconstitutional".
Addressing the media, the TDP spokesperson said, "Yesterday was a black day in the history of Andhra Pradesh. TDP strongly condemns the manner, in which the Bills related to the shifting of capital Amaravati have been passed by the honourable governor. It is totally unconstitutional."
He added that the move is a violation of the Andhra Pradesh Reorganisation Act. "It is clearly mentioned in the AP Reorganisation Act that there should be 'a' capital. They have not mentioned the term 'capitals' in the act," he said.
Meanwhile, Andhra Pradesh Irrigation Minister Anil Kumar expressed gratitude towards Governor Biswa Bhusan Harichandan for clearing the Decentralisation of Capital bill and the Capital Region Development Authority (CRDA) repeal Bill.
While speaking to ANI, Anil Kumar said, "We thank the governor for clearing the decentralisation Bill and the CRDA Bill which have been passed by the legislature. We want to decentralise the developmental activities so that the legislative, executive capital and the judicial capital are treated likewise." (ANI)