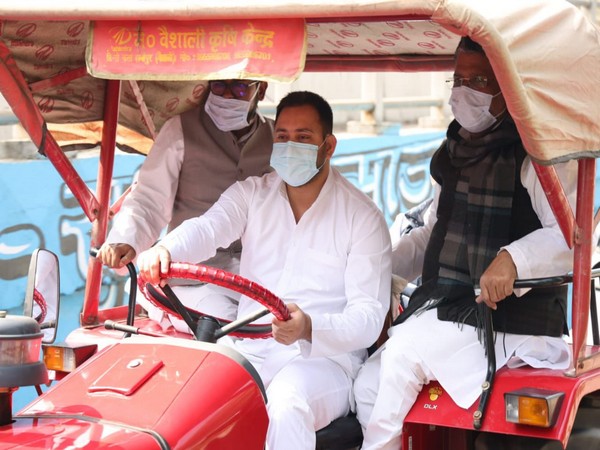 Patna (Bihar) [India], February 22 (ANI): Slamming the Central government over the new farm laws and fuel price hike, Rashtriya Janata Dal (RJD) leader Tejashwi Yadav on Monday said it is 'injustice' to not listen to farmers in an agricultural country like India.

"In an agriculture-dominated country, not listening to farmers is injustice. The government has proved that it is anti-farmer. You (BJP) came in power claiming that inflation will be lowered but prices of fuel and LPG cylinder are sky-rocketing," Yadav told reporters.
Earlier today, the RJD leader drove a tractor from his residence in Patna to the state Assembly.
"Going to participate in the assembly session by driving a tractor to mark protest against fierce inflation and price hike of diesel, petrol and domestic cooking gas and in solidarity with agitating farmers across the country," read Yadav's tweet roughly translated from Hindi.
The prices of petrol and diesel have been increasing continuously for more than 10 days and in some states, the price of petrol has even crossed Rs 100 in some states. Opposition parties also held protests in different parts of the country over the rise of prices of diesel and petrol.
Farmers have been protesting at the different borders of the national capital since November last year, against the three newly enacted farm laws - Farmers' Produce Trade and Commerce (Promotion and Facilitation) Act, 2020; the Farmers Empowerment and Protection) Agreement on Price Assurance and farm Services Act 2020 and the Essential Commodities (Amendment) Act, 2020. (ANI)