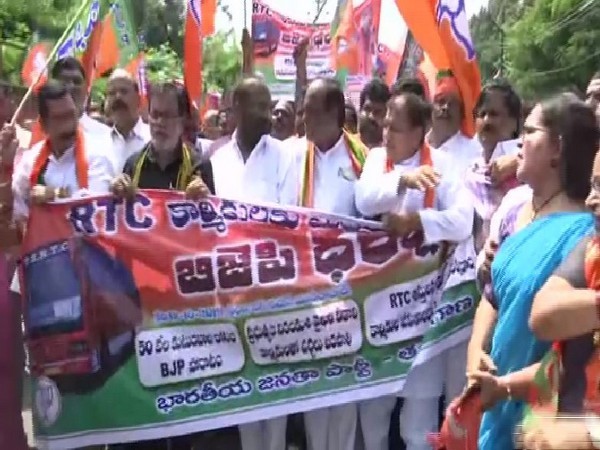 Hyderabad (Telangana) [India], Oct 12 (ANI): The Bharatiya Janata Party's (BJP) Telangana unit on Saturday extended full support to the Telangana State Road Transport Corporation (TSRTC) employees' strike and asserted that it will stand by them till justice is delivered in the issue.

"BJP has taken up this protest not only to support TSRTC employees' genuine and justifiable demands but we are also going to fight it out with the state government till justice is delivered," BJP's Telangana unit president Dr K Laxman told ANI.
"The strike is going on for the last seven days. We are protesting against Chief Minister K Chandrashekar Rao's autocratic rule," he added.
Laxman had earlier on October 7 said that the BJP is going to fight it out "democratically and legally" and see that the interest of TSRTC employees is protected.
"The government cannot on its own in a single stroke, sack 50,000 workers who have been working for decades. They have got their own rights," he had said.
The strike of the Telangana State Road Transport Corporation (TSRTC) has now continued for the eighth straight day on Saturday.
Hameed, a TSRTC driver, said, "We are on a strike and starting to proceed on 'Insaani Ittehad', a protest without causing any disturbance to the public. We have not received our salaries yet. We have risked our duties for the formation of Telangana state."
The Telangana High Court had on Thursday posted the matter of RTC for October 15 and asked the state government to submit a detailed report on the issue.
The employees had gone on strike on October 5, demanding the merger of the RTC with the government. (ANI)