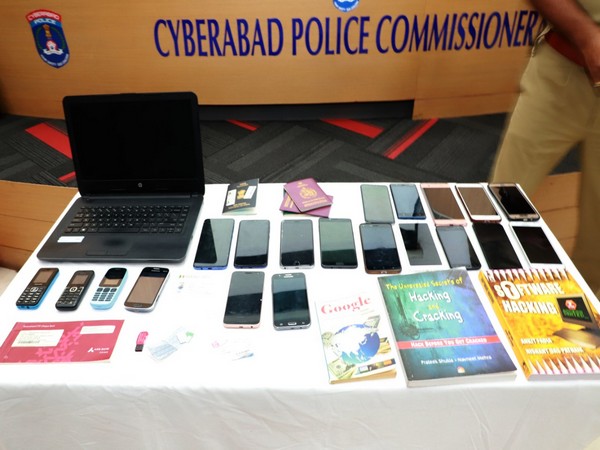 Hyderabad (Telangana) [India], Oct 12 (ANI): The Cyber Crime Police on Saturday arrested three Nigerian nationals and an Indian woman for cheating people on the pretext of giving them jobs in foreign countries.

The accused were identified as Diongue Mohammed (35), Musa Halimat (29), Ndour Alioune (32), Holito Zhimomi (35).
On investigation, police have also gathered information about two other members of the gang who are said to be absconding. The absconding accused have been identified as Petosile Ugha and Samson William.
"On August 29 we received a complaint in which the complainant stated that he received a fake job call in which the person stated that he has received a job offer from a foreign country and have to pay different amounts to complete the documentation and other procedure. On being lured with the offer he was made to pay Rs 47 lakh in total, in multiple installments", said Hyderabad police in an official statement.
The police also stated that the victim, who works in a senior position and has previously been employed in different countries, lodged the complaint after realising the scam, following which a detailed investigation was launched.
Investigation revealed that Diongue Mohammed was the mastermind of this crime and operates the gang. They collect job seekers database from various job portals and would contact them by offering jobs in different international institutions. They create fake mail ids and would send emails to the job seeker to make them believe that their process is genuine.
After arresting the accused, the police seized Rs 11 lakh cash, 21 mobile phones, four passports, one laptop, pen drive, six debit cards and 10 sim cards from their possession.
A case has been registered and further investigation is underway. (ANI)