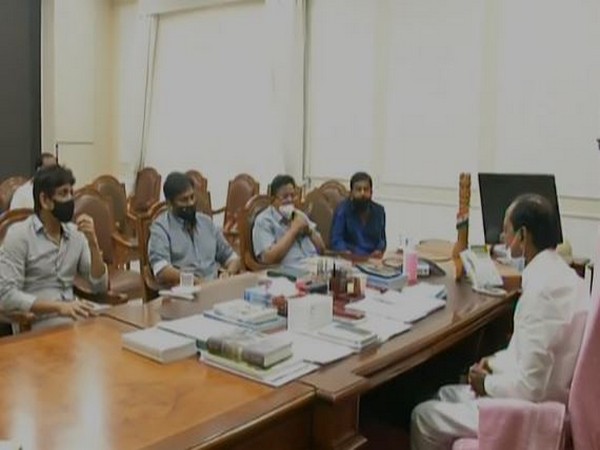 Hyderabad (Telangana) [India], November 22 (ANI): To overcome the losses suffered due to the COVID-19 pandemic, Telangana Chief Minister K Chandrashekhar Rao on Sunday assured the Telugu film industry that the state government will take all the measures needed to protect and support it.

The Chief Minister during a meeting with members of the Telugu film fraternity at Pragathi Bhavan said that concessions and exemptions would be given to support the film industry and the workers as they suffered losses due to the stoppage of film shootings and closure of the theatres due to COVID-19 pandemic.
During the meeting, the film representatives of the industry explained to the Chief Minister the losses incurred by the industry due to COVID Pandemic and urged him to extend support.
"The state government has taken several measures to attract industries to Telangana. In such a case will the government keep quiet when an existing industry is in trouble? Hyderabad is the center of very large film industry like in Chennai. Lakhs of people get employment in the industry and they are dependent on it. Covid has caused damage to the film industry as it did to other sectors," Rao said.
He said the responsibility to save and protect the film industry is everyone's and both government and film personalities should make joint attempts to support it.
"On behalf of the government, we will take all the necessary measures. We will include in the TRS GHMC poll Manifesto about the measures we will take for the benefit of the film industry," the Chief Minister assured.
According to a statement from Telangana Chief Minister's Office (CMO), Chief Secretary Somesh Kumar, Film Chamber President and General secretaries Narayan Das Narang, KL Damodar Prasad, Producers' Council President C Kalyan, Distributor Sudhakar Reddy, Producer Niranjan Reddy, and others participated in the meeting. It was decided in the meeting that shortly a meeting would be held at Actor Chiranjeevi's house to discuss the matter threadbare. (ANI)