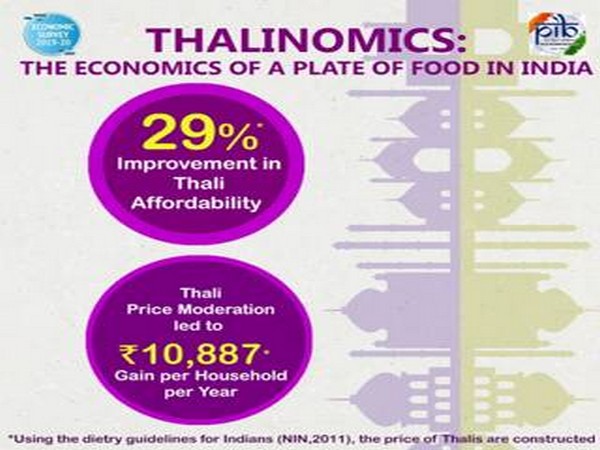 New Delhi [India], Jan 31 (ANI): The Economic Survey has claimed that affordability of vegetarian Thalis has improved 29 percent from 2006-07 to 2019-20 while that for non-vegetarian Thalis by 18 percent.

Union Finance Minister Nirmala Sitharaman on Friday tabled the Economic Survey 2019-20 in Parliament.
"The conclusion has been drawn on the basis of "Thalinomics: the Economics of a plate of food in India" - an attempt to quantify what a common person pays for a Thali across India. Using the dietary guidelines for Indians, the price of Thalis are constructed," it read.
The Survey states that across India and also the 4 regions- North, South, East, and West- it is found that the absolute prices of a vegetarian Thali have decreased significantly since 2015-16 though the price has increased in 2019. This is owing to the sharp downward trend in the prices of vegetables and dal in contrast to the previous trend of increasing prices.
"As a result, an average household of 5 individuals that eat two vegetarian Thalis a day, gained around Rupees 10887, on average per year, while a non-vegetarian household gained Rupees 11787, on average per year," according to Economic Survey. (ANI)