The biggest power of democracy lies in ballot, not bullet, says Adityanath 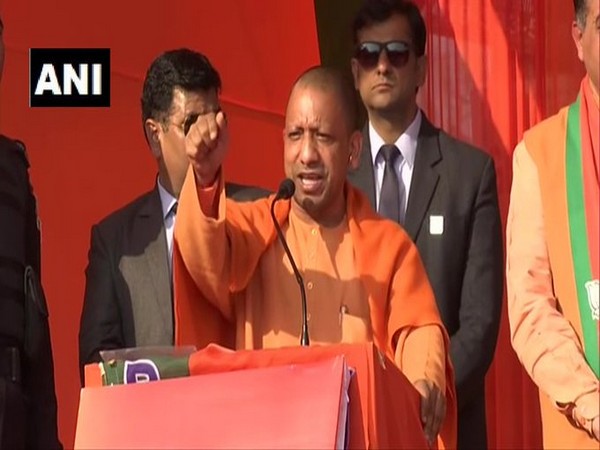 New Delhi [India], Feb 1 (ANI): Nipping the sentiments of the crowd that shouted "Desh Ke Gaddaro Ko, Goli Maaro Salo Ko" slogan on the top of their voices here at an election rally on Saturday, Uttar Pradesh Chief Minister Yogi Adityanath advised people not to take the path of violence, saying, that the biggest power of democracy lies in ballot and not in bullet.

He was addressing an election rally in Narela in the poll-bound national capital.
"Brothers and sisters this is elections. In elections, understand the value of each vote. The biggest power of democracy is ballot and not bullet. Understand the power of the ballot. I have come to appeal for the language of the ballot," said Adityanath.
Much to the embarrassment of Bharatiya Janata Party, Union Minister Anurag Thakur had raised the slogan 'Desh Ke Gaddaro Ko, Goli Maaro Saalo Ko' (shoot the traitors) several times while addressing a public meeting in Rithala on January 27.
Yogi Adityanath said that there seems to be a link between the protests against the Citizenship (Amendment) Act and a Pakistani Minister releasing a statement in favour of Delhi Chief Minister Arvind Kejriwal.
"Enemies of India, who speak the language of Pakistan are creating disorder by protesting everywhere," said Adityanath.
"Protests against CAA and a Pakistani minister releasing a statement in favour of Kejriwal, it all looks linked," he added.
Pakistan Minister Fawad Choudhry had recently tweeted saying, "Under pressure to lose another State Election (Delhi on February 8th), he (PM Modi) resorts to ridiculous claims and threats endangering Region." Chaudhry had posted the tweet in response to Prime Minister Narendra Modi's recent comment that India can defeat Pakistan in a war within 7-10 days.
Assembly elections will be held in Delhi on February 8 to decide who will rule the national capital for the next five years with the ruling AAP making a determined bid to return to power and the BJP seeking to have a chief minister in the city after 20 years.
The Congress, which has ruled Delhi for 15 successive years, is also making efforts to regain its support base. Counting of votes will take place on February 11.

In the 2015 Assembly polls, AAP secured an outright majority, winning 67 seats while the BJP managed just three. The Congress drew a blank. (ANI)