This much intolerance is unprecedented in India: Nadda on Bengal violence 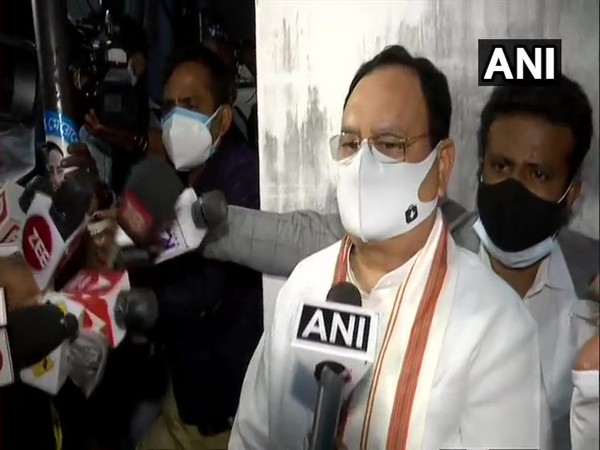 The BJP chief met the family of party worker Abhijeet Sarkar who was allegedly killed in post-poll violence in Beliaghata, Kolkata. Union Minister V Muraleedharan, West Bengal BJP president Dilip Ghosh and state general secretary Locket Chatterjee also accompanied Nadda.
"Abhijeet Sarkar's mother was weeping for him. Only those who cannot hear her screams can call such serious issues a stunt, a drama. BJP will not tolerate such bloodied politics--done just for power. BJP will not tolerate political oppression being done on the people of Bengal. I had said it earlier too, Mamata ji does not represent Bengali culture. Intolerance, thy name is Mamata ji," Nadda told ANI.
The BJP president took to Twitter to express his displeasure over violence in West Bengal.
"Met victim families of our Karyakartas (workers) who were targeted by the TMC post-election in Gopalpur, West Bengal. In independent India, this much intolerance is unprecedented till date. I want to assure our Karyakartas of West Bengal that crores of BJP workers are with them," tweeted Nadda.
"Our Karyakartas have suffered tremendous violence perpetrated by TMC in Pratapnagar and Sonarpur in West Bengal. Intolerance thy name is Mamata. We will put all these things in front of the people and provide justice to every Karyakarta in a fair manner," he said.
Earlier on Tuesday, Nadda met the family members of BJP worker Haran Adhikari who was allegedly killed by TMC miscreants after the election results were declared on May 2. He also met the families of party workers who were affected by post-election violence in South 24 Parganas.
"After the results, TMC goons went to the house of BJP worker Haran Adhikari and vandalised it. They attacked and threatened women and children. They broke Adhikari's wife's teeth. They then dragged Adhikari out of his house and beat him up. He died," JP Nadda told mediapersons here.
"Mamata ji, what your party did after winning, speaks about your belief in democracy. TMC workers and leaders are saying that all these incidents on social media are fake. You have seen how Haran Adhikari's wife and son were crying. I request the media to tell the truth to the nation," stated the BJP president.
BJP president JP Nadda is on a two-day visit to West Bengal starting from Tuesday to hold a protest against the alleged atrocities on party workers in the state by the ruling Trinamool Congress (TMC) government.
Several shops and residences were allegedly vandalised by TMC workers in the Gopal Nagar area of South 24 Parganas. "On May 2, TMC goons attacked my home as my husband was BJP's polling agent. They even threatened us to sell our property and leave this place," Shefali Das told ANI.
On Monday, the BJP office and some shops in Ghoshpara road of Bhatpara were allegedly vandalised by miscreants and at least 13 crude bombs were hurled in the area on Monday.
The shopkeepers alleged that TMC was behind the attack as the area is known to be of BJP supporters.
However, local TMC leader denied the allegations and said BJP's insiders were behind the incident.
Mamata Banerjee-led Trinamool Congress won 213 seats in the just concluded West Bengal assembly elections. The Bharatiya Janata Party garnered 77 seats in the 294-seat state assembly. However, elections for two seats in Murshidabad are postponed because of the demise of candidates due to COVID. (ANI)