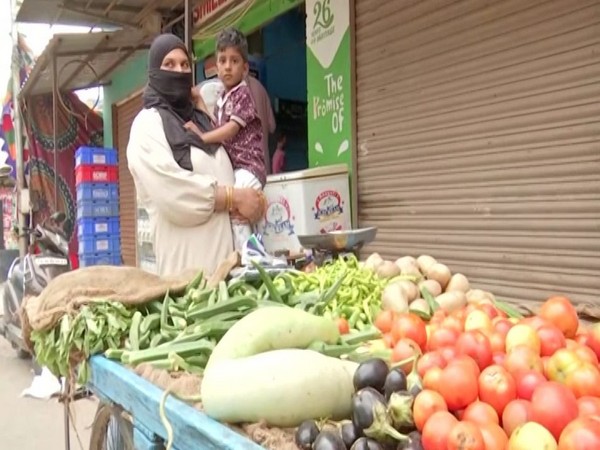 Hyderabad (Telangana) [India], June 11 (ANI): In order to earn a living and make sure her 4-year-old son does not sleep hungry after her husband's death, a woman is trying to make ends meet by selling vegetables on the streets in Hyderabad's Old City with her child walking beside her.

Six months back, the husband of Reshma Begum, who was an auto driver, passed away and since then it has been hard for Reshma to look after her 4-year-old son and herself.
Speaking to ANI, Reshma said, "Initially, I used to work as a maid at several houses and used to earn money for my family. But due to this coronavirus pandemic and the lockdown implemented due to the disease, I lost work and further couldn't find any. Though it was hard to feed ourselves during the lockdown, we used to have something for our survival. But then 6 months back, my husband passed away and since then it has been very difficult for me to survive and look after my son who is just 4-years-old."
To get out of her circumstances and start earning a living, Reshma decided to sell vegetables by buying a cart and selling vegetables from street to street.
"I want to feed my son and make sure that he doesn't starve. That is why I have decided to start earning by selling vegetables on a cart moving from street to street. But I don't even have money to buy a cart. So, I borrowed a vegetable cart by mortgaging my anklets. I started this two days ago and for the last two days, I was left with nothing. I have spent even more than what I am earning now, said Reshma.
She further said, "Yesterday I was able to earn around Rs 750 while the vegetable stock that I purchased was around Rs 1,500. Out of the Rs 750 that I earned, I have to pay a rent of Rs 100 for the vegetable cart and with the rest of the money I have to buy the vegetable to sell the same for the next day, " Reshma mentioned.
Unable to generate good income by selling vegetables, Reshma is still hopeful for a better tomorrow.
"It's been two days that I have been running this vegetable cart and have not earned anything, but I hope in the coming few days, I will have something so that I can feed my son and myself."
Reshma appealed to the Government to help her so that she and her son wouldn't starve to death. She further mentioned that several people across the country have been facing similar or even bigger problems due to lack of money.
"Many people, especially during the lockdown and pandemic, have been facing several problems and are unable to feed themselves," she said.
She said that for now, she is being able to feed her son, stating that she is worried about his future
"I am more worried about my son's future, about his education and as he grows, his expenses will also rise. I have no idea what to do, " she said. (ANI)