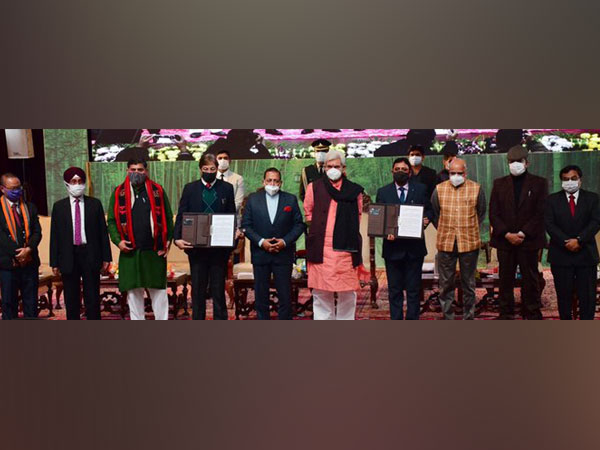 Jammu (Jammu and Kashmir) [India], January 13 (ANI): For bamboo entrepreneurship and its infrastructure development in Jammu and Kashmir, the North East Cane and Bamboo Development Council (NECBDC) on Tuesday signed a pact with the Union Territory administration.

Lieutenant Governor Manoj Sinha said, "The memorandum of understanding (MoU) marks the beginning of a new chapter and will create a new wave for overall development and harnessing of unexplored, untapped potential of the bamboo sector in Union Territory.
The agreement was signed in the presence of Manoj Sinha and Union Minister of State for Development of North Eastern Region Jitendra Singh.
With this, the post-Covid-19 economy has taken off from J&K as unutilised huge bamboo reserves of the Union Territory would be an important part of the economy in the future, Singh said.
This pact will create financial and market linkages for bamboo products and it will also facilitate promoting bamboo startup entrepreneurship and training facilities for farmers, Sinha said while congratulating the people of J&K and all those associated with the bamboo sector.
The UT administration will explore the possibility of setting up a State Bamboo Mission (SBM) in Jammu and Kashmir that will benefit a large number of farmers, he added according to a press release.
Sinha said that with the signing of this pact for bamboo development in the UT, the vision of Prime Minister Narendra Modi of ''Har Medh Par Ped'' has been made a reality in Jammu and Kashmir.
The pact has been carefully drafted for the overall development and harnessing of unexplored, untapped potential of the sector in the UT, Sinha said.
Through the partnership with the North East Cane and Bamboo Development Council, we will take up the implementation and development of bamboo technology, bamboo-based research, and related developmental activities in the Union Territory, Sinha said, the released reads.
He added that the administration will also replicate good practices in J&K by knowledge sharing and technical partnership.
It will create financial and market linkages for the bamboo products and facilitate promoting start-ups in the sector, the lieutenant governor added.
To increase the coverage of bamboo species in Jammu and Kashmir, NECBDC would provide technical guidance, said Sinha said.
The government is creating a robust business ecosystem in the bamboo sector in J&K. With these efforts, soon, bamboo products will be in the list of niche products of J&K and encourage employment for thousands, LG said.
"Now, local artisans, entrepreneurs can touch new heights of progress and make domestic products available to the global market," he said.
Reiterating the government's commitment to the promotion of the business sector in J&K, the Lt Governor said that just a few days back, the new Industrial Development Scheme-2021 worth Rs 28,400 crore has been implemented for Jammu and Kashmir and tremendous incentives have been given by the government to bring revolution in the business ecosystem here which for 70 years was denied to our nation's crown, Jammu and Kashmir.
"Industries and entrepreneurs were prevented from coming to Jammu and Kashmir for 70 years. Under the leadership of the Hon'ble Prime Minister, now there is the dawn of a new beginning in J&K," he added.
The Lt Governor mentioned the Bamboo Training Research Centre in Maharashtra which revolutionized the villages around there and emphasized that in the coming time, a similar type of Business Ecosystem should be developed in potential districts of Jammu Division.
India is second in the world in the production of bamboo after China, Sinha said. According to the statistics of the Ministry of Agriculture and Forestry Department, the annual production of bamboo is more than 32 cr tonnes, which contains about 136 species, he added.
It is unfortunate that despite being the second-largest producer in the world, our export of bamboo material in 2016-17 was only Rs 32 lakh, whereas, in the same year, we imported bamboo items worth Rs 213 crore, Sinha said in a press release. (ANI)