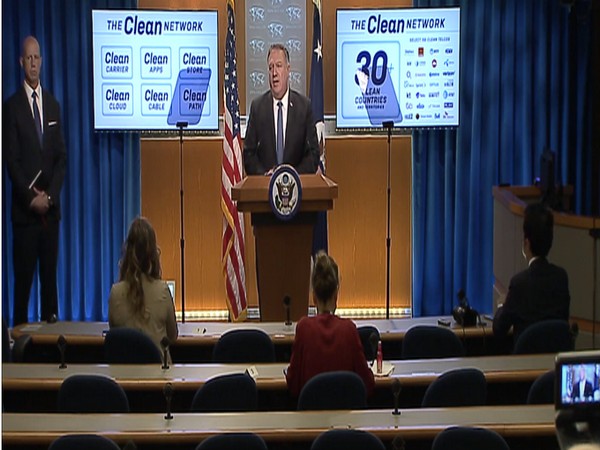 Washington DC [USA], Aug 6 (ANI): US Secretary of State Michael Pompeo on Wednesday said that the Trump administration is "working hard" to protect Americans from the threats of "untrusted vendors" such as Tik Tok and WeChat, which it wants to remove from US app stores like those operated by Apple and Google.

"We are working hard to keep Americans safe from the threats and keeping their data safe from untrusted vendors. We are working to ensure that untrusted Chinese telecom companies don't provide international telecommunication services between US and foreign destinations," Pompeo said at a press briefing of the State Department.
He added, "We want to see untrusted Chinese apps removed from US app stores. President Trump has mentioned impending action on TikTok and for a good reason."
Further speaking on the expansion of the clean network, Pompeo urged "freedom-loving nations' to join the clean network and also called for ending the use of Chinese cloud providers.
"I'm pleased to announce the expansion of the Clean Network with the launch of five new lines of effort. We call on all freedom-loving nations and companies to join the Clean Network," he said further.
Pompeo's announcement comes as part of the Trump administration's efforts to push back at China in several areas including over Beijing imposing restrictions on Hong Kong and its maritime claims in the South China Sea. Earlier, Pompeo in an interview to Fox News said that Chinese software companies doing business in the United States are feeding data directly to the Chinese Communist Party (CCP).
President Donald Trump said that the US will be banning Chinese video-sharing app TikTok.
Also, US politicians have repeatedly criticised TikTok, owned by Beijing-based startup ByteDance, of being a threat to national security because of its ties to China.
China and the US are at loggerheads on a variety of issues including Hong Kong national security law, the South China Sea, the novel coronavirus and trade.
Meanwhile, the US Secretary of State Pompeo on Wednesday further urged the American citizens to exercise "increased caution" while travelling to and within China.
"The world has witnessed more examples of CCP efforts to coerce and control its citizens. I urge US citizens to exercise increased caution while travelling to or in China. Freedom-loving nations must together confront the CCP's aggressive behaviour and the good news is that tide is absolutely turning," Pompeo said during the press briefing.
This comes days after South China Morning Post reported that six people including activist Nathan Law Kwun-Chung and former British consulate employee Simon Cheng Man-kit are being sought by Hong Kong police on suspicion of breaking the new draconian national security law. (ANI)