Trump praises Modi as 'tea wallah', says 'everybody loves him but he's tough' 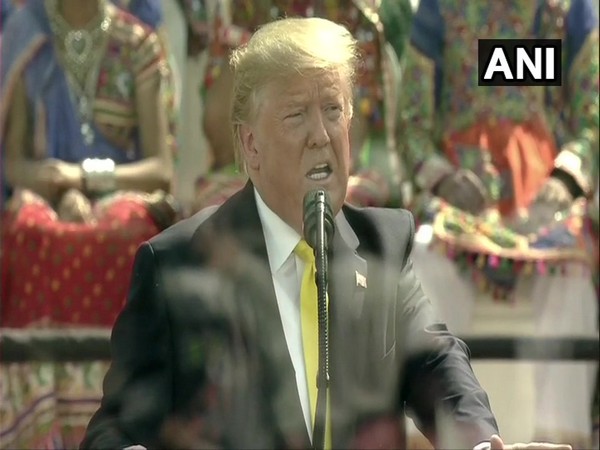 Ahmedabad (Gujarat) [India], Feb 24 (ANI): Addressing a mammoth crowd of nearly one lakh people at the 'Namaste Trump' mega event at the Motera Stadium here on Monday, US President Donald Trump said that Prime Minister Narendra Modi started out as 'tea wallah' but he is very tough and everybody loves him.

"We will always remember this remarkable hospitality. India will hold a special place in our hearts. PM Modi started out as 'tea wallah', he worked as a tea seller. Everybody loves him but I will tell you this, he is very tough. India a miracle of democracy," Trump said.
Trump, accompanied by First Lady Melania and daughter Ivanka, arrived on Monday in Ahmedabad on a two-day trip to India.
The US President also said that five months ago America welcomed the "great Prime Minister" at a giant football stadium in Texas and today India welcomes him at the world's largest cricket stadium right here in Ahmedabad.
"America loves India, America respects India and America will always be a faithful and loyal friend to the Indian people," he said.
Further appreciating India, the visiting dignitary remarked that PM Modi is a tremendously successful leader of the vast Indian republic, adding that last year more than 600 million people went to the polls and gave him a landslide victory in the largest democratic elections anywhere on earth.
"You are living proof that with hard work and devotion Indian cam accomplish anything they want," he stressed. (ANI)