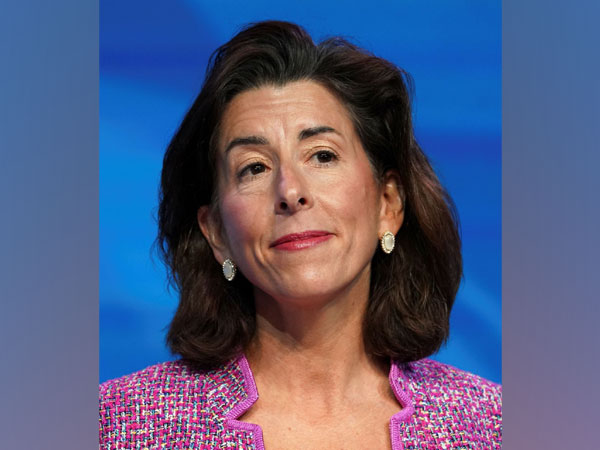 Washington [US], April 8 (ANI): US Commerce Secretary Gina Raimondo said on Wednesday that steel and aluminum tariffs imposed by former President Donald Trump's administration have helped protect jobs in the United States and she will aggressively use all available tools to counter China's unfair trade practices going forward.

Speaking at a White House Briefing, Raimondo said that President Joe Biden's American Jobs plan is to "make sure that every American has the opportunity to get a decent well-paying job with dignity."
"It's a historic investment in America intended to create tens of millions of jobs, rebuild our country's infrastructure, and position the United States to out-compete China... We need to play offense and defense. The jobs package is offense -- investment in America so that we can play offense. A lot of the tools that commerce has are defense; entities lists, tariffs, etc... We are in the middle of an overall review on the China policy," she said.
"My broad view is that what we do on offense, is more important than what we need to do on the defense. In order to compete with China, we need to rebuild America... We have to work with our allies and find common ground where we can," the secretary added.
"The 232 tariffs on steel and aluminum have in fact helped save American jobs in steel and aluminum industries. So what do with the tariffs? We have to now level the playing field. No one can now out-compete the American worker if the playing field is leveled," she said further
Raimondo emphasized that she will use all available tools in her power to aggressively protect US jobs from unfair trade practices by China.
"China's actions are uncompetitive, conversive, underhanded. They have proven that they will do whatever it takes. I plan to use all the tools in my toolbox as aggressively as possible to protect American workers and businesses from unfair Chinese practices," the commerce secretary said.
The Commerce Department had overseen the restrictions on China via an "Entity List" created by the Trump administration. It was responsible for broad national-security-based tariffs the United States imposed on steel and aluminum from key trading partners, including the European Union, as reported by Sputnik.
Toward the end of his term last year, then-President Trump also went after Chinese social media and payment applications TikTok and WeChat, trying to force their sale to US entities. Those moves were later struck down by US courts.
Under the Trump administration, ties between the two countries had deteriorated over issues such as human rights violations in Xinjiang, encroachment on the special status of Hong Kong, accusations of unfair trade practices by Beijing, lack of transparency concerning the pandemic and China's military aggression in various parts of the world. (ANI)